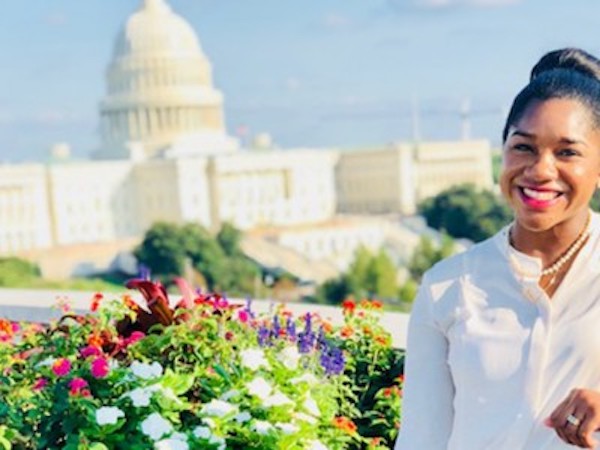 During my first year at the University of Virginia, I knew that I wanted to apply to the Batten School. At the beginning of my second semester at UVA, I attended a Batten School information session. Shortly after, I called my Mom and said, “I have found the graduate school for me!”

But somehow, I knew that Batten was the place for me.

The Batten information session showed me that a career in public service was possible here at UVA—something that I had not been able to find during my first six months at the university. While I knew that I wanted to study economics, statistics, and policy analysis, I also knew that I did not want to study them separately. Instead, I was interested in how these fields interacted in how they shaped policies—policies that affect the everyday lives of Americans, often in complex, inconspicuous ways.

The information session also revealed to me that Batten would not only provide me with strong research and data analysis skills, but it also would nurture my love for helping others. I would argue that the Batten Community is a truly special place for that exact reason—providing its students with a home to grow and thrive together.

Through programs such as Batten Builds and 'Hoos for Public Service Week’—a concept that I conceived during my time at Batten to promote opportunities to work as public servants in the federal government, I saw that there was an opportunity to make a positive impact in the Charlottesville community. As I learned how other graduate students and I could help others locally, Batten played a key role in cultivating support. Batten is a caring, intellectually diverse, dedicated, and strong community.

Following my studies at Batten, I worked for the federal government as an International Trade Specialist and later on as a Congressional Liaison at the U.S. Department of Homeland Security. I was incredibly grateful that I could make the transition from graduate school to the working world, despite a fragile job market. Without a doubt, Batten helped me find my dream job—not just through the required internship experiences and professionalization workshops, but through the interpersonal networks and long-lasting friendships, I made during my time there. The Batten network cannot be underestimated.

After working for the federal government for four years, I had the itch to reignite my love for research at the University level. When I applied to schools for my doctorate, I was still working with several Congressional staffers to help create federal policy solutions to improve some of the operational challenges that U.S. Customs and Border Protection (CBP) faced at the time. This included ways to better manage border surges, technology procurement, CBP staffing at U.S. ports of entry, intellectual property rights violations and cyber threats to national security. I found that in each of these assignments, my research and policy analysis skills acquired through Batten were immensely relevant. I also discovered that conducting research was yet another passion of mine—one that I wanted to further develop and nurture.

I left the public sector and decided to pursue a doctoral degree three years ago. I am currently in the third year of a five-year Ph.D. program in political science at the University of Pennsylvania. My areas of study include the United States Congress, political representation for marginalized communities, and the ways in which legislative procedures can influence policy outcomes, particularly those policies affecting communities of color. As a doctoral student, I often reflect on my Batten experiences and marvel at how rare it is to design a curriculum where students can learn both leadership and policy analysis skills all in the same program. This is what makes Batten Batten—its ability to combine both leadership and policy. I am so grateful for the lessons and experiences I had during my time at Batten. From the initial Batten information session that I attended until my graduation in 2012, I know that Batten played a prominent role in sparking my passion for research, ultimately leading me to a career in research and policy analysis in public service and now in academia.

Breanna Gray is currently a doctoral student in political science at the University of Pennsylvania. She is a 2012 graduate of the Batten School’s Accelerated Master of Public Policy (MPP) program at the University of Virginia (UVA). Breanna is also a 2011 UVA graduate, earning a Bachelor of Arts (BA) in foreign affairs and in French. Breanna is a former U.S. Department of Homeland Security Congressional Liaison. She is a native of Laurel, Md., and she is a member of the American Political Science Association and a member of Alpha Kappa Alpha Sorority, Incorporated.