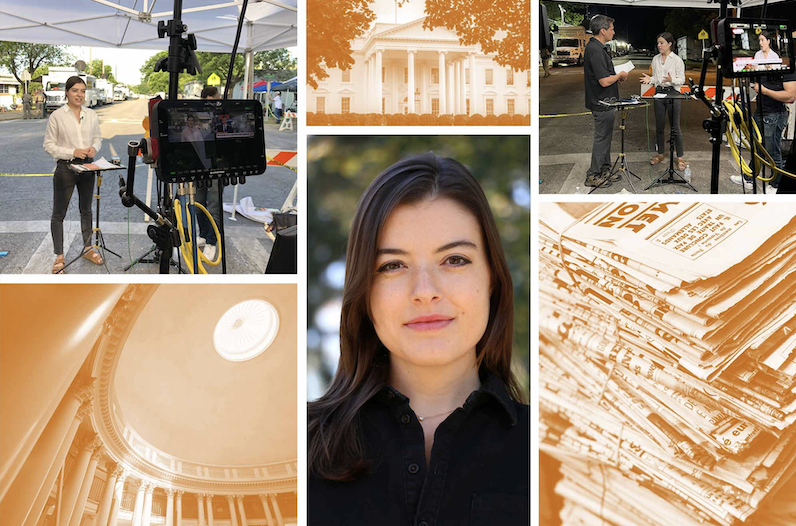 The passenger jet banked into its final approach at Austin-Bergstrom International Airport in Texas. Outside the windows raged “a truly biblical thunderstorm,” Nora Neus remembered.

The plane touched down at midnight. Neus, a University of Virginia graduate, was part of a CNN crew due to be on the air in Uvalde, Texas, in three hours. And Uvalde was a three-hour drive from the Austin airport.

“It was one of the worst thunderstorms I have ever seen in my life,” said Neus, a producer for CNN anchor John Berman.

The windshield wipers flailed madly, but couldn’t keep up with the torrent. She and Berman took turns behind the wheel. While one drove, the other gathered information on the worst school shooting since Sandy Hook. At Robb Elementary School, 19 students and two teachers were dead.

But it would be a survivor’s story that changed everything.

Not long after her arrival in Uvalde, Neus had an exclusive interview with 11-year-old Miah Cerrillo. The child’s macabre account of how she feigned death by smearing a deceased classmate’s blood all over herself to fool the shooter encapsulated the nightmarish horror of the massacre.

Neus, a producer who usually labors behind the scenes, told Miah’s story on camera to CNN’s national audience. Days later, President Biden used the story in his address to the nation. And days after that, Miah told the story herself to the U.S. House of Representatives’ Oversight and Reform Committee, bringing some representatives to tears.

Miah’s story – the one Neus first reported – was then in all the major newspapers.

But when the Jefferson Scholar was graduating from UVA in 2015 with a degree in history, and again a year later with a Master of Public Policy degree from the Batten School, a journalism job wasn’t a thought in her mind. She figured she was destined for a career in politics.

That is until the day, right in front of her, a man dropped out of the sky.

A Change in Direction

In hindsight, Neus conceded, maybe this career path was predictable.

“I had always loved journalism, and I was always a news junkie,” she said. “And when I was a little kid, I wrote a newspaper for my family and for family reunions called, ‘Neus News,’ a play on my last name.”

When Neus first arrived on Grounds from her home in New Jersey, she brought with her a year of college credits. The Jefferson Scholarship gave her four years of tuition-free education, so “I wanted to make the most of that,” she said.

She put down the academic pedal to earn her undergraduate and master’s degrees almost simultaneously.

On April 15, 2015, Neus was in Washington killing time before an interview for an internship with the Department of Health and Human Services as part of her studies with the Frank Batten School of Leadership and Public Policy. She was on the steps of the U.S. Capitol chatting on the phone with her father when something in the sky caught her attention.

“I saw this guy come toward us in what looked like a lawn chair with a propeller on top,” she said. “Then he just landed right on the lawn in front of me.”

She relayed to her dad what was happening. Her father, fearing a terrorist attack, told her to run.

Neus had witnessed a daring stunt from Florida postal worker Douglas Mark Hughes. He’d launched his gyrocopter outside Washington and piloted it to the West Lawn of the Capitol. It turns out the man strapped to what looked like a cross between a helicopter and a scooter was a largely harmless protester trying to bring attention to campaign-finance reform. But he’d also penetrated unnoticed into perhaps the most secure airspace in the world.

Armed law officers raced past Neus to the pilot. Later, a bomb squad showed up.

Neus started chatting with reporters who had scrambled to the scene. She found out she and a CNN producer had, years apart, attended the same small Catholic high school in New Jersey. Shortly after, Neus had an earbud in her ear and was staring into a live television camera while recounting the tale to CNN anchor Anderson Cooper.

At the end of the segment, a show producer in an New York studio spoke to Neus through the earpiece.

“You have a future in journalism, if you want it,” the voice in the earpiece said. “Do you want to come intern for us this summer?”

“I realized this is what I wanted to do with my life,” Neus said. “That summer really changed my mind.” And even though she was essentially at the academic finish line, she wasn’t sure how a master’s degree in public policy would serve her now.

Plus, there was a job opening at CNN and she wanted it.

“They said, ‘We’d love to hire you right now, but that’s not in your best interest,’” Neus said. A producer told her head back to Charlottesville, finish school, work in local news, and then return to CNN.

Neus forged ahead with her studies, worked for a while at UVA’s student newspaper, the Cavalier Daily, and applied for a job at WVIR, Charlottesville’s NBC affiliate. Although she had no real experience – “I did not know how to turn on a camera” – the station managers saw a spark and took her on as a day-to-day hire. No contract. No promises.

Small towns like Charlottesville are “journalism bootcamp,” Neus said. She recorded, edited and presented her own stories, working as what reporters call a “one-man band.” Her days were filled with house fires, city council meetings and occasional shifts on the anchor desk.

“It was the hardest job I’ve ever had,” she said.

A little more than a year and a half later, with her degrees secured and some experience in hand, she went back to CNN. After an overnight shift in late May, her boss called her at her apartment. She and anchor John Berman were heading to Uvalde.

The Interview That Almost Wasn’t

Not long after arriving in the Texas town, the CNN crew had located parents who were willing to let their child talk to a television crew. But as Neus was finalizing the arrangements for Berman, plans changed.

The child was so scared of the gunman that she didn’t want to talk to any man. Her family told Neus, “Miah wants to tell her story, but she wants to speak to a lady reporter.” Neus met with Miah and her family, took notes, and later hustled back to where CNN’s crew was broadcasting live. Neus recounted Miah’s heartbreaking story on air.

It was a hard story to tell, but one Neus says she needed to tell.

“Imagine being that little girl,” Biden said from the White House, “that brave little girl in Uvalde, who smeared blood off her murdered friend’s body on her own face to lie still among the corpses in her classroom to pretend she was dead, in order to stay alive.”

And then on June 8, Miah herself addressed members of the House of Representatives in a recorded statement.

“He shot my friend that was next to me and I thought he was going to come back to the room,” she said. “So I grabbed the blood and put it all over me.”

Now, weeks later, Neus is back in her Brooklyn apartment. She’s back on the overnight shift preparing Berman for the daybreak show, “New Day,” that he co-anchors with Brianna Keilar.

In the afternoons, Neus spends a few hours writing. She recently finished a book telling another child’s story. She co-wrote “Muhammad Najem, War Reporter,” with a Syrian teenager who risked his life using his cell phone to document the war in his country. The book will be released in September.

Her book about Muhammad and her interview with Miah both share something important to Neus.

“Someone has trusted me to tell their story,” she said. “That is my responsibility. So I am going to carry it with me.”

When that book comes out later this year, it will feature this review:

“What an amazing story this is! One family’s struggle for survival in the chaos of Syria, and one boy’s courageous decision to risk his life to tell the story. This graphic memoir is inspiring and exciting, powerful and very poignant. I loved it!”

It was written by Anderson Cooper, the CNN anchor she first talked to in 2015 when the flying contraption flopped down in front of her and changed her life.