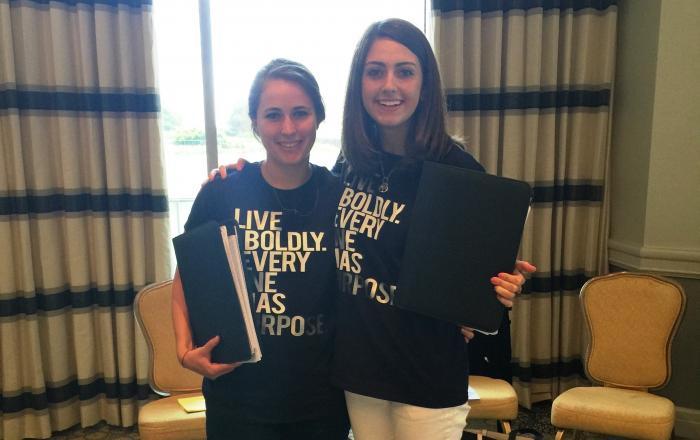 The knowledge and skills learned in Professor Paul Martin’s class, “Philanthropy: Private Initiatives for the Public Good,” prepared two Batten School recent graduates for a national stage. Paige McDermott (BA ‘15) and Stephanie Hough (BA ‘15) represented the school at a national conference and competition with representatives from 14 peer institutions to vie for the top prize of $50,000. McDermott and Hough’s proposal won the top prize this past weekend.

This year select students from across the universities funded by the Once Upon a Time Foundation’s Philanthropy Lab were invited to a summer conference in Chicago where they could win a $50,000 grant to fund the efforts of a nonprofit they deem most needed in the community. The program aims to give students a real life chance to learn about philanthropy, evaluate different needs and charities in the community and ultimately make a concrete difference with their contributions.

The beneficiary of the winning grant is the Sexual Assault Resource Agency (SARA) in Charlottesville. McDermott, Hough, Mastin and Gordon had previously selected SARA to win a $15,000 grant through Martin’s philanthropy capstone. SARA provides free resources and services to all sexual assault survivors, men, women and children, regardless of background. The organization is guided by a mission to end sexual violence and to provide education and advocacy to survivors. SARA has served Albemarle, Nelson, Louisa, Fluvanna and Greene Counties for over 33 years and is the only organization of its kind in the area. Their efforts have proved to be invaluable to the community and now, because of the work of Batten students and the Philanthropy Lab, they have the chance to make an even greater difference with a combined $65,000 grant.

With this $50,000 prize, the total amount of grant money given away through Martin’s philanthropy classes surpasses $350,000 since 2012.  “I’m so proud of these recent graduates. Paige and Stephanie are the kind of students that make teaching easy. It’s wonderful to see them win the $50,000 against such stiff competition. It speaks to the quality of students we have in the undergraduate program, but Paige and Stephanie also set the bar for other students to come,” said Martin.