"I watched my mother persevere through a battle with cancer for eight years before she passed,” said Velez. “Despite her struggle with the disease, she never missed my baseball games, college visits or teacher conferences. Her example is what I try to emulate—work hard, be there for others, and thank God every day for the opportunity to be alive and healthy. I'm extremely humbled to be recognized for this award by the community. When I started my college journey, I never thought I'd find myself in a community this special, and for that, I am forever grateful."

Legacy Awards are given by the Batten Undergraduate Council (BUC) to graduating candidates in Batten’s bachelor degree program who are noted among their peers for specific characteristics. Velez is joined by fellow 2019 Legacy Award recipients Madalene Danklef for Pioneer; Kiara Rogers for Integrity, also known as the “Fearless Frank” award; Adeline Sandridge for Leader Among Leaders; and Alec Tekamp for Intellectual Curiosity. 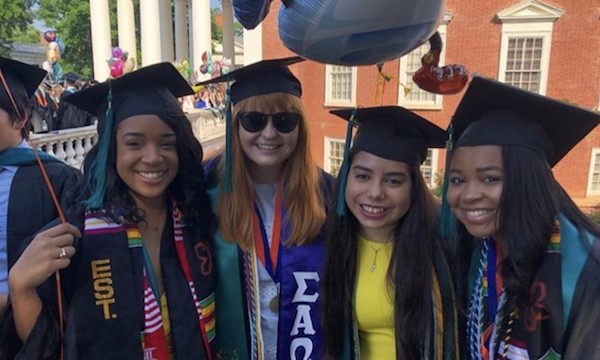 These awards, in their own unique way, display the range of leadership qualities Batten champions in its students. Whether it’s intellectual curiosity, perseverance, or integrity, the qualities of a good leader cannot be limited to one specific trait.

Adeline Sandrige, a Crozet, Va., native, is the BUC’s outgoing Director of Communications. "I'm truly flattered and honored to receive Batten's 'Leader Among Leaders' award, an honor I know carries an enormous legacy and a long list of accomplishments for those who have come before me,” said Sandridge. “To be recognized for service to a place I've loved so much these past two years is tremendously rewarding; knowing that I've made a difference for my classmates through event planning, communication, and hard work is something I'll carry with me into my next adventures and remember long after graduation.”

Upon graduation, Sandridge will move to Washington, D.C., where she will begin work as an Associate with Hamilton Place Strategies, one of the nation’s leading strategic and communications and public affairs firms. “I'm excited to use all Batten has taught me in this new role, and to begin a new phase of life."

The recipient of this year’s “Fearless Frank” Award is Kiara Rogers, from Chesterfield, Va. "To receive this year's "Fearless Frank" Integrity Award was a true honor,” said Rogers. “To be seen and recognized by my peers is an indescribable feeling. “As I prepare to embark on a new journey to Columbia Law School in the fall, I am grateful for the skills gained in my time at the Frank Batten School. This program enabled me to not only dive deeper into my policy areas of interest, but it also afforded me the opportunity to learn valuable and transferable skills, such as critical thinking and problem-solving. To do this with a group as passionate as ours was an incredible experience."

Rogers was also one of three UVA graduates to be selected as a Governor's Fellow. The program offers rising college seniors, graduating seniors and graduate students an opportunity to gain valuable, firsthand experience working under cabinet secretaries and alongside staff in Virginia’s Office of the Governor. Each fellow is placed in a division within the governor’s office, where they take on a variety of tasks and projects.

Norfolk, Va., native Alec Tekamp was recognized for his intellectual curiosity, a quality that both Frank Batten and Thomas Jefferson believed was integral to great leadership.

“I am so honored to receive the Virginian Pilot Intellectual Curiosity award,” said Tekamp. “The Batten School has been a second home for me the last two years and provided me with some of my best friends, as well as incredible opportunities to learn from interesting guest speakers and impactful professors. I could not be more thankful for my time at Batten and for this award!”

After graduation, Tekamp will relocate to Washington, D.C., where he will begin work for Deloitte as a Federal Business Analyst.

Madalene Danklef, from Dallas, received the Pioneer award. “I am so honored to have been recognized with the Pioneer award,” said Danklef. “My time spent in Batten has been nothing short of incredible, and I will be forever grateful to the professors, administrators, and classmates who continually challenged and supported me over the past few years.”

Next fall, Danklef will head to New York City to work for JP Morgan in Wealth Management. 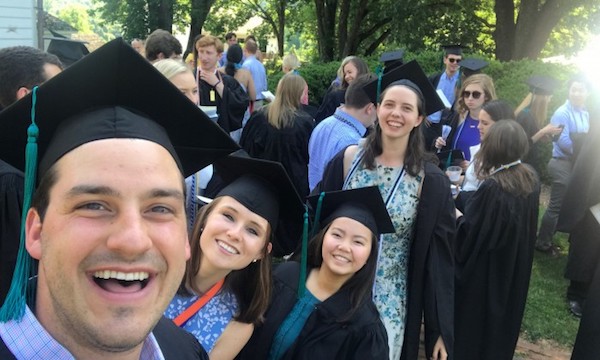 Amy Dalrymple, who is the outgoing president of the Batten Graduate Council (BGC), is also a member of the 2019 Presidential Management Fellows program—the federal government’s most distinguished fellowship for graduate students entering the federal workforce. A native of Potomac, Md., she completed her undergraduate studies at UVA, majoring in history with a minor in dance.

“I am deeply humbled to be one of this year’s Pilot Award recipients. I am so fond of the Batten School and its mission and have such deep gratitude for the faculty, staff, and administration who foster a welcoming, educational, and supportive home for its students,” said Dalrymple. “I am honored to have been a member of the Class of 2019 and I am so thankful that I was able to go through this experience with such talented, dedicated, and motivated classmates."

Jack DiMatteo of Deerfield, Ill., is the outgoing editor of the Virginia Policy Review and will relocate to Washington, D.C., this summer. “I am extremely grateful for the great honor of the Pilot Award and humbled to be recognized alongside Amy, Norah, Bradley, and Alice, who all inspire me,” said DiMatteo. “I have been so lucky to be a part of this community and I’m excited to see all that my classmates do next as we leave Grounds.”

Since he joined the Batten community, DiMatteo has played an active role at the School—from organizing Batten Hour discussions on the importance of voting to spearheading film screenings aimed at heightening awareness about the plight of refugees. He is also the recipient of the David A. Winston Health Policy Fellowship—the most competitive health policy fellowship in the nation—awarded to only two graduate students. In just a few weeks, DiMatteo will put his passion for health care policy to use.

Bradley Katcher, who hails from Cleveland, Oh., is the executive director of FCG Consulting and has worked for two Batten professors as a graduate teaching assistant. Next fall, he will begin a master’s degree program at UVA’s Data Science Institute, after which he plans to pursue a Ph.D. in economics. 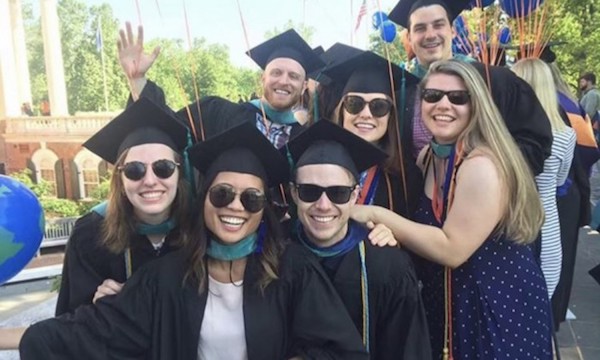 Norah McDonald graduated from UVA in May 2017 with a bachelor's degree in economics and a minor in social entrepreneurship. “I am honored to be among this year's Pilot recipients, as they are not only future leaders but changemakers today who touch the lives of those they interact with daily, said McDonald. “During my last semester at Batten, my father became unexpectedly sick and quickly passed away. My Batten friends and professors helped me continue to thrive academically, but cared for me so deeply as well, constantly pausing to ask how I was doing and be whatever I needed them to be in that moment.”

Like many of her classmates, McDonald will head to Washington, D.C., to work for Deloitte as a Government and Public Service, Talent and Organizational Performance Analyst. McDonald’s long-term goal, however, is to work in food and nutrition policy. “I hope to transform the food system from a focus on processed foods to whole foods. I desire to transform communities and create social impact by empowering others through the health benefits of natural, wholesome foods!”

Alice Thomson graduated from UVA in 2017 with a bachelor’s in English and government. During her tenure at the University, she has worked as a volunteer firefighter, EMT, and a special rescue technician for both Charlottesville City and Albemarle County. She was one of the first responders to the tragic events that occurred on Aug 11. 2017 in Charlottesville. Next fall, Thomson will begin a master’s program at UVA’s School of Nursing.

"I was extremely honored to be the recipient of this award. I feel that my path to get to Batten and the one I'm choosing to take now that I've finished the program is unconventional, but I've always felt so supported by the Batten community- by both the faculty and my fellow students,” said Thomson. “During my two years at Batten, I continued my work as a volunteer firefighter and EMT at two different agencies. Normally, that came out to more than 24 hours a week riding on a fire engine or an ambulance. The opportunity to be invited into people's homes when they or their loved ones are sick or injured is an absolute privilege. What has been even more amazing was to have those experiences while at Batten. This school has given me a unique experience that I couldn't have found anywhere else."

During the University's Valedictory Exercises, which took place on Friday at the John Paul Jones Arena, Batten student Wittney E. Skigen (MPP’ 20) gave the welcoming remarks. Class of 2019 Trustee Marianna A. Brazao introduced the Class of 2019 awards, announcing a new award in leadership which went to Batten student, Austin Widner (BA ’19), of Saltville, Va., a small town in Appalachia.

"The Class of 2019 Trustee is excited to present first-ever Bicentennial Leadership Award, which is designed to recognize a deserving student who through unconventional methods of leadership has significantly contributed to our community through the qualities of empathy, humility, and resilience," said Brazao. “[Austin’s] work and advocacy for the Appalachian region has succeeded in bringing awareness to this community and opening the paths for students from this community for the future." 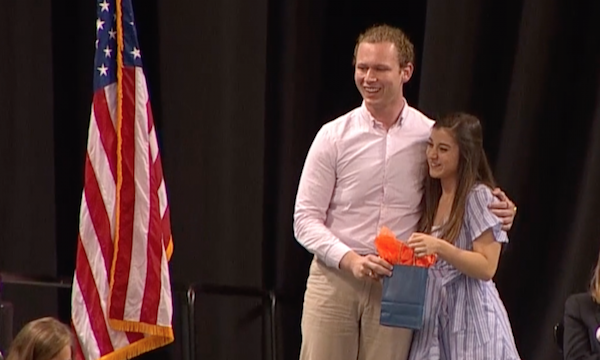 Of the 162 Batten students to receive degrees at Batten’s Academic Regalia Ceremony, one graduate, Cory Harris, was absent from the festive occasion. A lacrosse player, Harris was busy defeating the University of Maryland team, taking UVA’s Men's lacrosse team to the final round of the NCAA tournament. On or off the field, in or outside of the classroom, Batten students continue to lead from anywhere, defy expectations, and incite positive lasting change. Congrats to the Class of 2019.