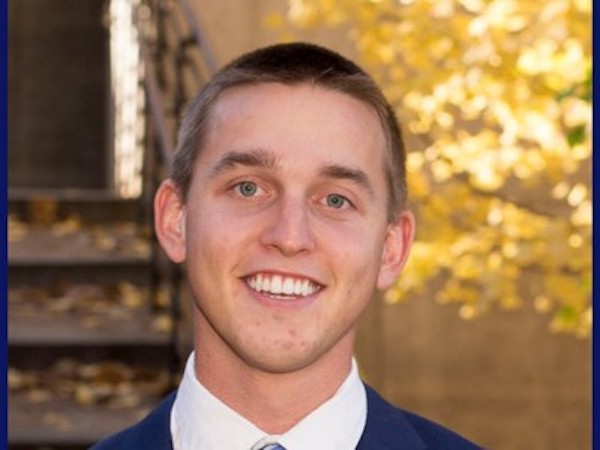 For Kyle Gardiner (MPP ' 16), the Batten alumni network cannot be underestimated. Gardiner, who will welcome 2019 Batten graduates into the alumni community at this year's graduation ceremony at James Monroe’s Highland, credits much of his personal and professional success to his Batten network—a network that is still relatively young by university standards.

Gardiner, who currently works as a policy analyst at the Office of Information and Regulatory Affairs, a part of the Office of Management and Budget that helps coordinate the government-wide review of proposed regulations, embodies the type of career many Batten graduates aspire to when it comes to policymaking.

“Working at OIRA, I serve as the desk officer for a specific policy portfolio and help support the intergovernmental review of proposed rulemakings within that portfolio,” said Gardiner. “What I love about this position is that I deal with a smorgasbord of policy analysis—the types of issue areas coming across my desk are incredibly varied, I love the constant need to deep-dive into potentially novel areas of policy.”

For Gardiner, his time at Batten helped prepare him for this role.

"During my first year at Batten, we had a 48-hour project, where we were each presented a completely random and generally obscure policy issue, and had exactly two days to research the issue, identify solutions, then draft a memo that evaluated those solutions before making a recommendation on the path forward,” said Gardiner, “The timelines I work on are a bit longer now and my end product is different, but that simulation still sticks with me as one of the most formative and accurate experiences I had at Batten.”

It was the real-world application of policy analysis that attracted Gardiner to Batten, who felt that upon completing his undergraduate studies at Virginia Tech was not quite done with school.

“The act of deciding to go to graduate school became the way I distilled what I specifically wanted to pursue professionally. Having been a high schooler in Charlottesville during the founding of Batten, [the School] had always piqued my interest, and once I learned of the ability to pursue a dual masters with the Architecture School’s urban planning program I was pretty sold.”

Gardiner ultimately choose Batten because he was convinced that Batten—although young in comparison to the other public policy schools on his radar, seemed to place more individual attention on its students, which is what he desired for his graduate studies.

During his time at Batten, he undertook an internship with Accenture Federal Services, which later led to a full-time position with the consulting agency following graduation.

“What I loved most about Accenture was the people I worked with, but speaking strictly in the context of applicable job skills it really felt like a God-send how naturally many of the soft skills I developed across graduate school applied in consulting,” said Gardiner. “I think it’s important to approach the seeming gravitational pull of consulting with some skepticism, but there’s also a lot of excitement with peeking behind chronic or seemingly-intractable challenges and trying to synthesize and then articulate the specific steps necessary to resolve the issue. So much of the writing and presentations I did at Batten [taught me to make] every word count, which I did my best to apply at Accenture.”

Gardiner also credits his experience during his final year as a Graduate Teaching Assistant (GTA) which allowed him to hone his public-speaking skills, which came in handy later working at Accenture.

“Without a doubt being a Graduate Teaching Assistant at Batten brought me the greatest joy in my three years at UVA, and I think I’ll forever crave getting back into that classroom environment.”

It was through his alumni network that the job at OIRA developed. Former Batten classmate, Shannon Joyce (MPP ’15), who is currently also with OIRA, informed him that there were openings, and knowing Gardiner’s policy interests, she encouraged him to apply.

“Through a combination of similar interest in policy areas and good fortune in group assignments Shannon and I worked together a number of times in my first year at Batten,” said Gardiner. “We stayed in touch after graduation and it had been so interesting to hear about her journey in the federal government through the Presidential Management Fellows (PMF) Program. She let me know about a public posting for a Desk Officer in her branch at OIRA last spring, and after hearing about her work here I was hooked.”

Gardiner points out how becoming involved in the Batten Alumni Advisory Board has evolved since he first joined in 2018.

“In my first year on the Batten Alumni Advisory Board I wasn’t as active as I’d have liked to be, but we just came off a great spring meeting and I’m excited to be more proactively engaged this coming year,” said Gardiner. “Since graduating, Twitter has been my primary means for keeping track of new research in public policy—I follow some fantastic former and current Batten professors.”

Gardiner believes he is not the only Batten alum interested in the research emerging from the Batten community and believes that by staying connected to Batten’s contributions in the world of public policy can only behoove alumni like himself.

“As Batten matures into its second decade, alumni engagement [will play an important role] in the School’s long-term success,” said Gardiner. “The Alumni Advisory Board serves as an important network that current students have access to as they look for APP projects, internships, and [of course] jobs. But beyond that, we have a role in fostering the Batten ethos that ensures each new generation of alumni enter the world as analytical, inquisitive, and conscientious leaders. I’m excited to be a part of that.”

Batten Alumni Advisory Board member Kyle Gardiner graduated with a master's in public policy and urban planning from the University of Virginia in 2016. A Charlottesville native, he attended Virginia Tech for his undergraduate studies. He currently works as a policy analyst at OIRA and resides in Baltimore, Maryland.