Va. Secretary of Commerce to Discuss "The New Virginia Economy" 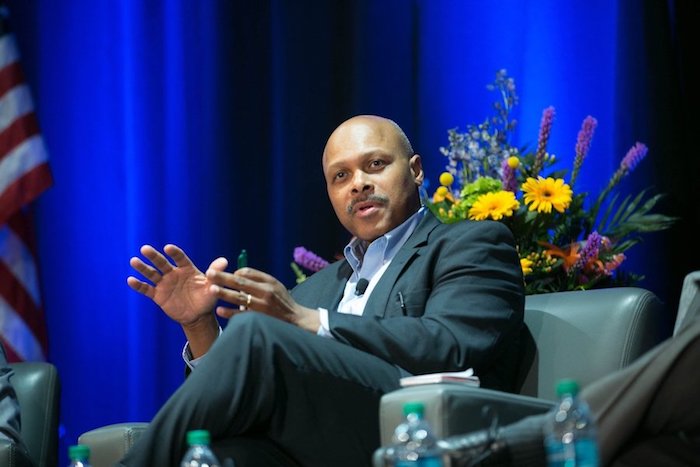 Virginia Secretary of Commerce and Trade Maurice Jones spoke at the Batten School in early October. He discussed how public policy must drive innovation and entrepreneurship in the Commonwealth of Virginia.

“Business creation is one of our golden opportunities for growth in the Commonwealth. I am delighted that a Virginia asset as powerful as UVA is in this business. Partners like this will ensure that we have maximum success,” said Secretary Jones.

Maurice Jones was appointed Secretary of Commerce and Trade in January 2014 by Governor Terry McAuliffe. Previously, Jones served as Deputy Secretary for the U.S. Department of Housing and Urban Development from April 2012 through January 2014. As the second most senior official at HUD, Jones managed the Department’s day-to-day operations, the annual operating budget and the agency’s 8,900 employees.

A Kenbridge, Virginia native, Jones also served as Commissioner of the Virginia Department of Social Services and Deputy Chief of Staff to then-Virginia Governor Mark Warner. At the U.S. Treasury Department, Jones was Special Assistant to the General Counsel and he also served as Legal Counsel to the Community Development Financial Institutions (CDFI) Fund and as Director of the Fund during the Clinton Administration. Jones also worked for the law firm of Hunton & Williams in Richmond, Virginia and he was a Partner at Venture Philanthropy Partners, a firm that invests millions in the Washington, DC metropolitan area to assist low-income children.

Jones received a Bachelor of Arts in Political Science from Hampden-Sydney College and attended Oxford University in England on a Rhodes scholarship, where he received a Master of Philosophy in International Relations. He later received a Juris Doctor from the University of Virginia.