Williams: Public Option in Biden Plan Could Change the Face of US Health Care

Among those orders: Speed up vaccine production, expand testing, support the safe reopening of schools and reduce racial and ethnic disparities in care and treatment.

As a physician and health care researcher and administrator at the University of Virginia, I agree that the biggest issue facing President Biden is stopping the coronavirus. But there is far more to America’s health problems than COVID-19. Biden promised sweeping reforms to the health care system; what follows is perhaps the top 10.

Biden’s platform included health care policies that would have tremendous impact on every American, among them:

1. Give Americans a new choice on health insurance – specifically, a public option that allows working-age adults - and not just the elderly - to buy into a public insurance plan rather than a private plan like Medicare. If adopted, those eligible could purchase insurance directly from the federal government, likely through the federal marketplace, similar to the existing Affordable Care Act marketplace.

2. Extend coverage to working Americans further by increasing the value of tax credits to lower premiums, by increasing the amount that enrollees can deduct from their income tax to purchase health insurance coverage on an exchange.

3. Expand coverage to low-income Americans. In 14 states, governors and state legislatures have refused to take up the Affordable Care Act’s expansion of Medicaid eligibility - thereby denying Medicaid to an estimated 4.9 million adults.

4. Stop surprise billing. That’s when an insured patient receives a bill from a provider they may not have even seen, such as an anesthesiologist who is out of network.

5. Tackle market concentration across the health care system. The Biden administration has pledged to aggressively use its existing antitrust authority to address this problem.

6. Partner with the health care workforce to lower costs and improve health outcomes.

7. Repeal the exception that allows drug companies to avoid negotiating its prices with Medicare.

8. Limit manufacturers from setting abusively high launch prices for drugs that face no competition. Also limit price increases for all brand, biotech and generic drugs to the rate of inflation.

9. Allow consumers to buy prescription drugs from other countries.

10. End the tax break that drug companies receive for advertising.

More about the public option

Among the 10 initiatives, the public option alone would change the face of U.S. health care. By essentially price-setting and thereby benchmarking payments for the great majority of health services, the government would become the Sam’s Club of health care, which would drive prices down.

Currently, insurance payments to physicians and hospitals are often expressed in terms of “Medicare plus” (or “minus,” in the case of Medicaid). The Medicare rate serves as the benchmark on which private commercial insurers base their negotiated fee schedules. But with the government more heavily involved in directly paying for health services, the “Sam’s Club” effect will push prices down. Compared to commercial insurance, individual consumer costs would likely be dramatically lower for those choosing the public option.

That’s why it’s not hard to imagine that many Americans, perhaps a significant majority, would choose the public option over other insurance, including employer-based health plans with their ever-increasing shift of costs to employees. With that scenario, it’s true the public option might encourage commercial insurers and perhaps health systems to further coalesce to protect their market shares and spread risk. This may or may not result in additional price disparity as nongovernmental insurers feel compelled to optimize their margins.

Since Reconstruction, U.S. domestic policy has been a study in contradiction and compromise, characterized by policies and politics that, on their surface, were intended to help the nation heal from war, lift Americans out of poverty and unite the nation.

The New Deal, the GI Bill, the Social Security Act and the establishment of the Federal Housing Administration were implemented in a way that was almost criminally obtuse in their failure to anticipate the adverse impacts they would have on Black Americans. “Black neighborhoods” didn’t so much happen; instead, they were deliberately engineered through New Deal policies in the 1930s and the ironically named Fair Housing Act enacted in the 1960s, which was supposed to fix the post-World War II housing shortage. State and regional housing authorities did precisely that - for white Americans.

So what does this have to do with a potential Biden-led public option, which would also represent a major expansion of the U.S. social safety net?

The Confederacy justified slavery as an issue of “states’ rights” and federal overreach. From Reconstruction on, major federal policy changes have required compromise with Southern statesto secure enough votes for passage.

In most cases - this applies to the GI Bill, the Social Security Act and the Federal Housing Administration - the compromise took the form of allowing Southern states to control the implementation of these policies. Southern Veterans Affairs offices, housing authorities and Social Security offices, adhering to the specific language of the law, were highly effective in disenfranchising Black Americans. Northern states were much less likely to do so, although by no means was this ubiquitous.

Which brings us back to number three on President Biden’s list. Nearly 5 million Americans are denied access to Medicaid by governors and state legislatures.

The message: Legislative language isn’t all that matters. To truly end the centuries-long health disparities among Americans, an essential step is not only to scrutinize how public policy is designed, but to hold our leaders accountable for how its implemented. As the aforementioned policies demonstrate, good intentions on paper, when left to state governments, are routinely applied inequitably in America, particularly in certain states. The implementation of the ACA is a current example, wherein former Confederate states and those led by the most conservative legislatures have resisted the expansion of Medicaid, often citing “states’ rights.”

While I admittedly cannot prove causality, the correlation between the list of states with the shortest life expectancies, the states with the worst disparities in life expectancy for Black people and states that have not expanded Medicaid is high. I would argue that it is too high to be coincidental. Federal policy that would mitigate and has mitigated health disparities has once again been subverted by individual states’ choices in how (or how not to) to implement it, much as the New Deal was.

There is a way to fix this. A public option, underwritten by the federal government, would enable individuals to circumvent those state governments who have prevented them from accessing health care and other services. By calling out the specific states, if not by name, at least by clear implication (“In 14 states, governors and state legislatures have refused to uptake the Affordable Care Act’s expansion of Medicaid eligibility - point 3 in Biden’s plan”), the Biden administration would be proactive in addressing the gaps in care not yet filled by the ACA via the public option. Doing this could effectively put an end to yet one more harmful “states’ rights” argument and marry federal health policy with equitable implementation. Seems a worthy objective to me.

Read in The Conversation 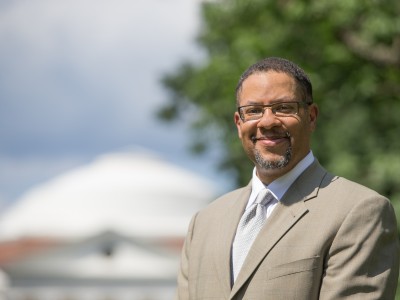 Michael D. Williams is an associate professor of surgery and public policy at the Frank Batten School of Leadership and Public Policy. Williams is interested in, among other things, comprehensive, apolitical analysis of current and proposed health policy for citizens and policymakers.

Batten's Dr. Michael Williams acknowledges that Virginia Governor Ralph Northam is under pressure to reopen, but says the state isn’t ready yet. "To be able to do it safely, I think additional things need to be in place that are not necessarily in place for all members of our society."