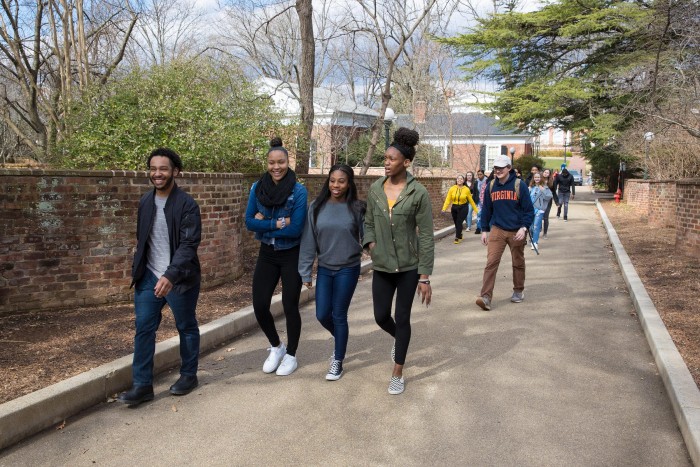 “Rise Together,” a UVA-founded nonprofit group-mentoring program that pairs UVA students with first-gen students at local schools, brought a group of students from Monticello High School to UVA this spring for a day-long tour given from the perspective of first-gen students who are also University Guides – students who give tours of Grounds to the public.

Michelle Hong, a member of the Class of 2019, told the high-schoolers about growing up living in a crammed basement room with her mother in Alexandria. She and her mother rarely shared meals together because her mother was always working.

“One of the most formative memories of my childhood was my mother arriving home around 6 p.m. after a long day of work, to drop off my dinner and going right back to work,” she said, speaking from a podium in Newcomb Hall’s ballroom.

Rather than wallow in sadness over this, Hong used that experience to galvanize her. “Thanks to my mother, I’ve built a life for myself based on gratitude. College is absolutely an attainable goal … any dream is attainable as long as you put in the work,” she said to applause.

The Monticello students didn’t only hear from UVA students. Two esteemed members of the faculty, who were also the first in their families to attend college, shared their stories.

Marcus Martin, UVA’s outgoing vice president and chief officer for diversity and equity, shared his inspiring story. “Who is interested in going to college?” he asked the group. Every hand went up. “That’s good,” he said.

Martin recommended the students embrace a “confidence and a can-do attitude. And you all can do it,” he said. Martin applied to North Carolina State University because his father, who had a sixth-grade education, worked at a nearby paper mill that offered college scholarships. He got the scholarship, enrolled and became the first African American football player at the university. He also helped to form a fraternity.

“But I had too many things going on and became disorganized,” he said. His advice to the Monticello students was to be sure to find a good mentor who can offer good advice, such as not taking 22 college credits in a semester, as he did. 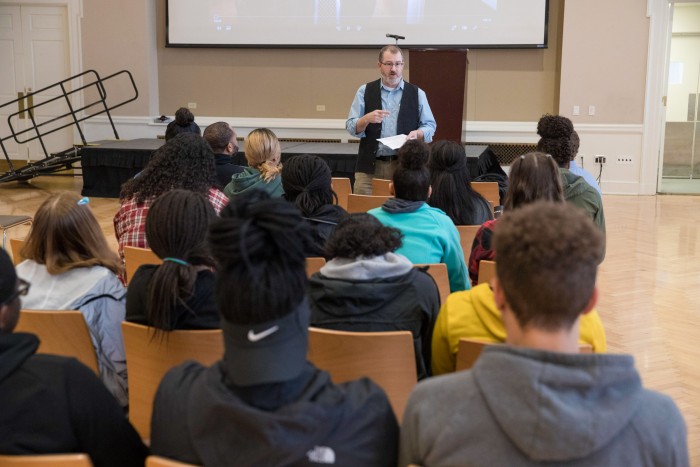 Paul Martin, an associate professor of public policy in the Frank Batten School of Leadership and Public Policy, then shared his story of growing up in California as a first-gen student. His mother did not have a degree and his father earned his GED while serving as a submarine machinist in the Air Force. By working overtime most weekends, his father was able to pay for Martin to go to a private Catholic school, which he said gave him “a leg up” when he applied to college. He was accepted to the University of Southern California but was only able to go one year because he’d run out of money. But in that first year, he met a female student who made a difference in his life.

Circling back to Marcus Martin’s advice to find a mentor, Paul Martin said the woman seemed like she genuinely cared about him and wanted him to succeed.

“To me that is one of the most important lessons, to find those people in your lives that see more in you than you sometimes see in yourselves,” he said.

Martin allowed that universities are not always good at supporting students and are slow in catching up to the task. He said that his first year at USC (he ended up enrolling at the University of California at Irvine and earning a B.A. in political science) he turned in a paper to a professor. Getting it back, he said the professor wrote, “Are you sure you know how to write a paper?”

“I was like, ‘Damn, what is that?’” he said to laughter. “I actually felt like college was trying to hold me back and it wasn’t until I found more people who had my back that I sort of took off again. Finding those people is so important for your success.”

Martin said when the Monticello students get to college, they will probably feel like outsiders. “Universities are not always well-designed for people who are either lower income or without a lot of college experience,” he said.

There will be people who assume you know things you don’t know or that your parents are connected in ways that they are not connected, Martin continued.

“But that’s on them, not on you,” he said. “The fact of the matter is that a lot of universities are late to the game figuring out that there are a lot of really smart people whose parents don’t have college degrees or parents who don’t have a lot of money.”

“There are people across every university who are working extra hard to make college more accessible to folks who are first generation,” he said.

Martin told the students to find the value in their unique lives. “All of the experiences that you’ve had – those are super important. Your experiences should be the powerful thing that drives a university and not the other way around. Whatever university you land at, you belong there and you should own that place. Not hide your experience, but to embrace it,” Martin said.

The Monticello students spent the rest of their day with University Guides who offered a tour of the Lawn and some of the libraries and lunched with the high-schoolers in the Multicultural Student Center.

Kinlaw had only been to UVA once before the March event. It was her freshman year for a school trip. She says she is planning to apply to James Madison University, Hampton University, the University of North Carolina’s Charlotte campus and Old Dominion University. She wants to study sociology or nursing. “Nursing is my number one choice,” she said.

Kinlaw plans to keep working with Rise Together her senior year. She said she loves the lighthearted mental breaks they take. “Sometimes we sit on balloons and try to pop them,” she said. “For ten minutes, you get a little break and then you go back to work and it really helps.” 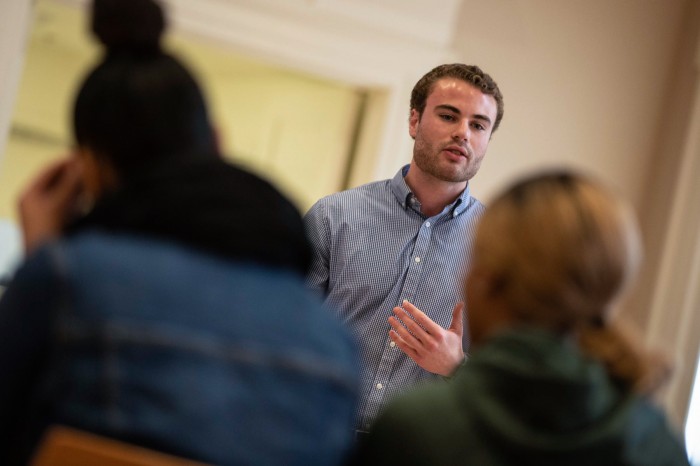 Rise Together is Growing

Since it was founded three years ago by Batten student Bryan Christ, who graduated from the University in May, and his mother Gina, Rise Together has really grown.

“We have really stepped up our efforts to provide professional development opportunities for our UVA Facilitators through a new Leadership Team,” said Bryan Christ.

He said the team gives the facilitators, who work in the local schools with first-gen students, valuable experience that will make them more competitive job applicants and ultimately more successful in their careers.

Christ said the Monticello High School teacher who accompanied the high school students described the UVA visit as the best college tour he has ever been a part of.

The UVA facilitators, or mentors, team up with local middle- and high-school students who are participants in a national program called AVID, which stands for “Advancement Via Individual Determination.”

“Our leadership team is extremely committed to better serving the AVID students we work with, even giving up two hours every Sunday to participate in leadership team trainings and planning sessions in addition to the weekly responsibilities of their leadership role,” said Christ. “Our expansion would not have been possible without their dedication and support, as well as the support of Madison House, the independent, nonprofit volunteer center for UVA students,” he said. “They have been extremely helpful in providing volunteers, meeting space and travel reimbursement for our facilitators.”

Paul Martin is a political scientist who studies how and when political elites respond to the preferences of ordinary people. His research also examines how and when citizens become involved in the policy process.