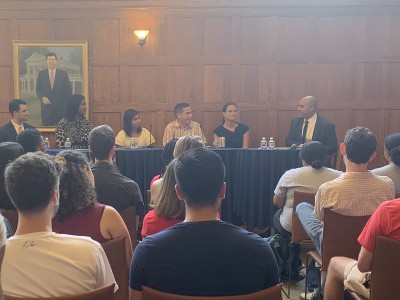 This week, Batten hosted the first Batten Hour of the year featuring brief remarks from Dean Ian H. Solomon followed by a roundtable conversation with the dean, students, and faculty, providing an opportunity for the Batten community to get to learn more about the new dean, both professionally and personally.

Roundtable participants included students Lauren Faloni (BA’20), Matt Gillam (BA ’21), Kendall Johnson (MPP ’20), Ben Stolz (MPP ’20) and professor Sophie Trawalter. Discussion topics ranged from favorite meals (the dean’s being anything spicy) to how the dean’s family shaped the person he is today to how the Batten community can help people feel a sense of belonging [and being listened to].

Solomon described his first-time seeing Obama in 2004 and his recollection of Mandela’s first speech after he was released from prison in 1990. What stands out in Solomon’s memory is not the words they spoke, but how they made him feel: hopeful, included, valued.

“People will never forget how you made them feel.”

Angelou’s quote underpinned the Batten Hour conversation where Solomon asked and answered questions, sharing his ideas about how the Batten community can exemplify the experience of belonging in a diverse community and of commitment to something greater than ourselves.

Scattered across the panelists' tables were notecards, each with a question to pose the dean. Student Kendall Johnson pointed out how many of the notecards carried a similar theme in their questions—that of family.

“A lot of these questions I noticed are familial,” said Johnson, “For me growing up, family dinners were very important to me because the taught me how to communicate with my elders, so I am wondering what your family situation was like.” And she turned to Dean Solomon.

“My family situation—much like many others—was complicated,” said Solomon candidly who relayed a story of two adoptive elder siblings, [three younger siblings], and his late parents, whose examples of compassion and forgiveness continue to inspire him daily.

“We were able to all get along even though we were all very different,” said Solomon. “I am not sure I model the same acceptance and forgiveness that my dad did or tell my kids how special they are like he did for me. It’s a work in process.”

Questions concerning the desire to be good emerged during the second half of the hour stemming from a question about the honor system and whether Batten creates a sense of belonging for everyone at the University; and how one can strike a balance between the competing demands of a relentless schedule while still playing an active role in a community like Batten’s.

“We all lead busy lives, and figuring out how to balance that is really tough,” said Solomon recounting his last three years of running his own business, and having more control of his time despite hectic travel. He recalled the challenges of “trying to fit in my exercise, my journaling, my meditation every morning. It was crazy, right?”

While these were rituals that were important to Solomon’s personal growth, he admits he struggled to find balance—just as everyone does. At one point, he added a fourth element to his morning routine – to write a poem for his mother while she was sick.

“I wrote her a poem every day,” said Solomon, “Nothing made her happier than seeing her kids be creative, so I would write her a poem every morning—which I did for three and a half months—some were pretty good but most were tolerable first drafts.”

And while he didn’t believe he had adequate time to write a poem every day, he persisted after seeing how happy it made his mother. During the final months of her life, he missed one day while traveling to Geneva and instead, sent a poem by Rilke - because he believed it mattered.

“So, I continued to wake up at 4:30 am and write her a poem, but that meant I was not always getting to my exercises, journaling, or the meditation,” said Solomon. “So how can we structure our time so it empowers us?”

For Dean Solomon, work-life balance is no easy feat—and it doesn’t necessarily get easier with time. However, it is possible to make choices that allow one to pursue a path that can ultimately make a positive impact—however large or small, allow one to be present for the people one loves, remain open and kind to others, because after all, people might not remember what you said or did, but they will remember how you made them feel.

Sept. 23: A Health Care Debate with Michael Cannon, Director of Health Policy Studies at the Cato Institute, and Michael Williams, UVA Associate Professor of Surgery and Director of the UVA Center for Health Policy 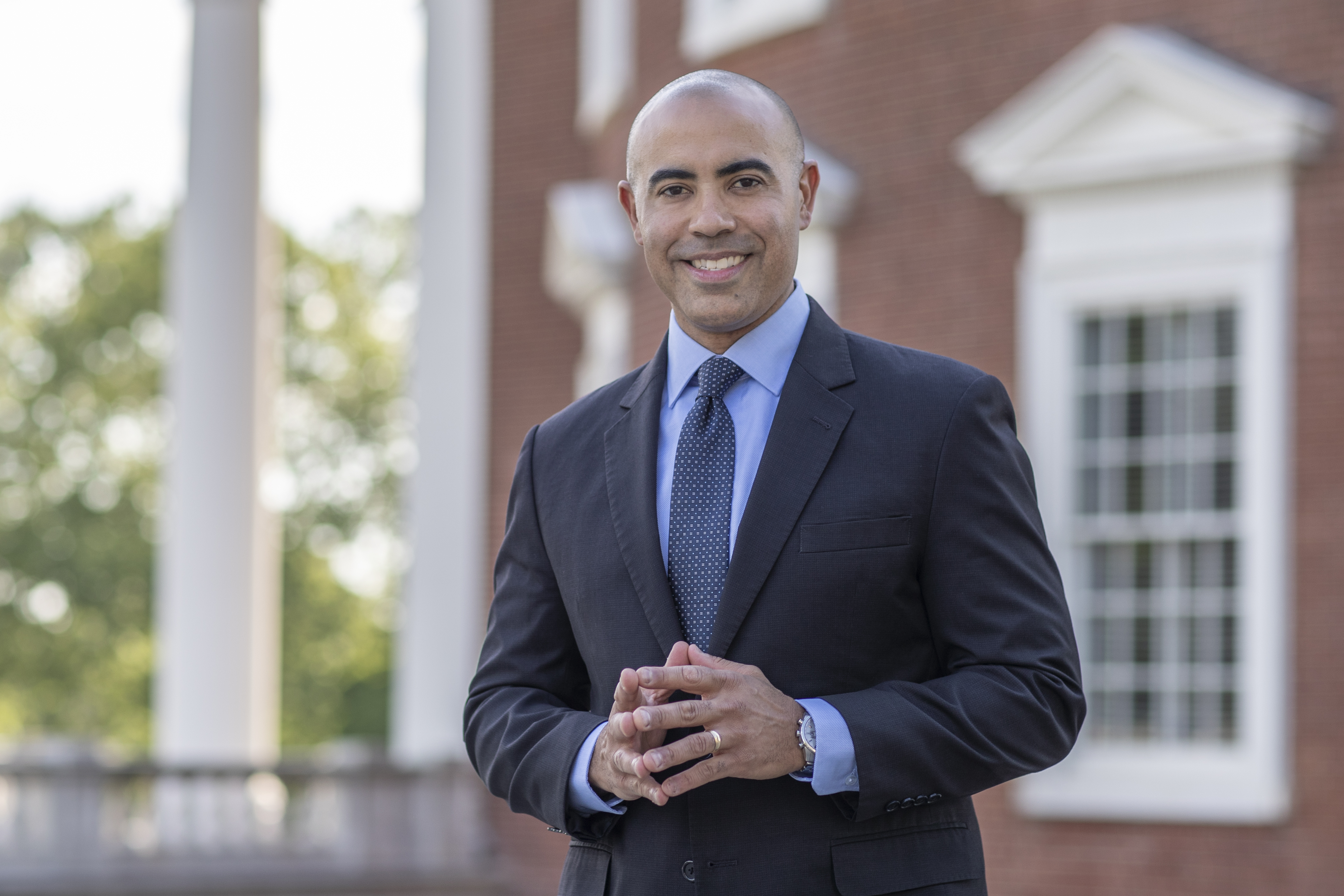 Ian H. Solomon has been dean of the Frank Batten School of Leadership and Public Policy since September 2019. He comes to Batten with more than 20 years of experience as an educator, policymaker, diplomat and businessman in more than 40 countries. The Batten School has the distinction of being the only school of public policy administration in the U.S. that is explicitly committed to teaching leadership. The School’s programs inspire students to act vigorously, effectively and ethically on behalf of the common good.

Virginia’s junior senator, who introduced legislation limiting presidential war powers as tensions escalated in the Middle East, said he came to the Batten School to hear from the one group likely to be most affected by war: young people.

Dean Ian Solomon took a timeout from his regular day-to-day responsibilities to step in as guest coach for the UVA women's basketball team as they faced off against Old Dominion University on Nov. 24.

Antiprejudice norms and attempts to conceal racial bias have made Whites’ positive treatment of racial minorities attributionally ambiguous. Although some minorities believe Whites’ positivity is genuine, others are suspicious of Whites’ motives and believe their kindness is primarily motivated by desires to avoid appearing prejudiced.

Batten alum Kathryn Babineau (MPP ’13) is a Ph.D. student in the University of Virginia's sociology department, where she studies globalization, labor rights, and public and private regulation. Previously, she worked as a human rights investigator for the Fair Food Standards Council and as a research coordinator at National Defense University.