On the latest episode of a new podcast from UVA’s Deliberative Media Lab, Dean Ian Solomon joined experts in policy, history and media to discuss ongoing threats to our democratic system. 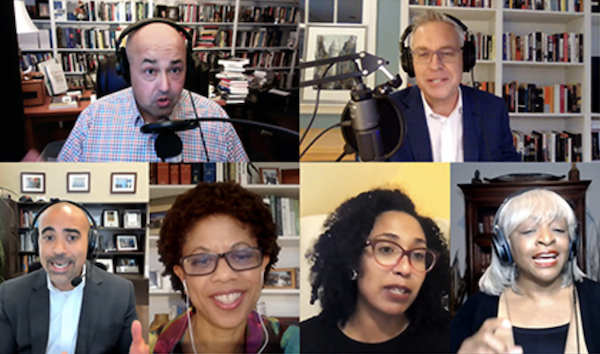 Five months ago, two University of Virginia professors launched the first episode of a podcast called Democracy in Danger, guided by their conviction that democracy faces its greatest threats since World War II.

In the latest episode, Siva Vaidhyanathan, a media studies scholar, and Will Hitchcock, a professor of history, reviewed the events of 2020 and revisited the podcast’s premise. “Is democracy still in danger? Should we have a season two?” Hitchcock asked. “Or should we just take a vacation?” To help them answer that question, they brought on four guests, including Batten School dean Ian Solomon.

The conversation began with the challenges Joe Biden and Kamala Harris face as they prepare to enter the White House. “No one’s having a spa day who’s in the Biden-Harris transition right now,” joked Melody Barnes, public affairs director for UVA’s Democracy Initiative and former director of the White House Domestic Policy Council. Biden and Harris must address a global pandemic, a sitting president who refuses to concede, and the usual “binder” of campaign promises. “It’s an old saw that you should take advantage of a crisis,” Barnes said. In her view, the key question is whether members of the Biden administration can “align their objectives” with their response to the “emergency situation” of our present moment.

Solomon argued that Biden’s team also needed to prioritize international relationships. “My hope is that this next administration will strengthen multilateral institutions rather than undermine them,” he said. “We're safer and more secure when we work with the World Bank and the United Nations and NATO and the World Health Organization.” Many of the challenges the world faces, from climate change to nuclear proliferation, “cannot be solved without the United States and cannot be solved by the United States acting alone,” he said.

The work ahead for Biden and Harris is daunting and includes the task of eliminating fundamental threats to our democratic system—some of which have been a century in the making and others just a couple years, Hitchcock pointed out. In response to the question of whether democracy remains in danger, all four guests answered with a resounding “yes.”

“Democracy has always been in danger,” Solmon said. “It didn’t start off great and get bad. Sorry, folks. We made progress, but there’s a lot more to do.”

Leah Wright Rigeur, a historian at Brandeis University, agreed. “We take for granted that we're the United States, that we have democracy,” she said. “But democracy doesn't exist for a good portion of the population, particularly the most marginalized and the most vulnerable.”

According to all four speakers, American democracy is in an especially fragile state at the moment. Barnes argued that we’re experiencing a “war against the enlightenment,” where “data and facts no longer seem to matter,” and Carol Anderson, a professor of African American studies at Emory University, drew a parallel between this issue and now-common criticisms that academia is out of touch.

But Solomon pointed out that the accusations of elitism do have some validity. “Parts of the academy are not dealing with discomfort, and they’re not becoming engines of social mobility to take the poorest of the poor and bring them into the middle class,” he said. University faculties often lack diversity as well, he added: “There's a lot of work to do to make the academy what we want it to be.”

Still, he also stressed academia’s vital role in helping to close what he called “the reality deficit.” In particular, he highlighted the Batten School’s focus on evidence-based leadership. “Can we get people to take evidence seriously? Can we put an emphasis on facts and data so that people can actually make better decisions? I think that's where the academy, that's where schools of public policy, that's where forums like this come in,” he said.

In a brief question-and-answer session with the audience, one participant asked for examples of successful democracies that might serve as models for the United States. Solomon was hesitant. “I can point to very homogenous societies that do democracy really well,” he said. “I'm not sure they offer the best examples for us in a very diverse and vibrant country like we have.”

The speakers did, however, list some lessons that could be learned from other democratic societies, including removing money from campaign processes, doing away with gerrymandering, and generally making it easier for citizens to vote through policies such as automatic voter registration. The fact that the U.S. lacks such policies can be tied to our history with slavery, Anderson noted. “That’s part of what we must reckon with: the ways that we have targeted African Americans in this nation for disenfranchisement,” she said.

Changing our voting policies isn’t as difficult as it sounds, Solomon said, and from the perspective of many other nations, it seems like common sense: “Over and over here, we have these aspects of our democracy that other countries look at and say, ‘We would never do that. That's antidemocratic.’”

Wrapping up the episode and the podcast’s first season, Vaidhyanathan said that he had been “inspired as well as chastened by what we face.” He promised that the show would be back in February for season two. Because, he said, “we’re not out of the woods yet."

Launched in 2018 during the inauguration of Jim Ryan as UVA’s ninth president, this year’s edition will feature seven students, faculty and staff members — including Batten School Dean Ian Solomon — and is free and open to the public.