“I transferred from Miami-Dade College, which is the largest college in America,” said Ramputh, a Miami native. “I was not ready to leave home right after high school so I applied to three nearby universities, intending to transfer after two years.”

At Miami-Dade, Ramputh enrolled in the Honors College, a niche two-year program that allows students to hone their academic interests while giving them the time and space to later transfer to a top-tier American university. During this time, Ramputh, who knew nothing about UVA or Batten, had a professor who encouraged him to apply to UVA.

“My English professor Carmen Bucher was instrumental in my decision to come to UVA and pushed me to apply to the school,” said Ramputh. “She had always wanted to go to UVA but because of family and financial restraints was unable to do so.”

Ramputh’s interest in political science and international relations led him to apply to the Batten school, which he confesses was partly accidental.

Following his acceptance, he started to learn more about the school and its history and felt as if fate had spoken.

“I called the admissions office to tell them I was going to accept and spoke with then director of admissions, Patti Edson,” said Ramputh. “She knew everything about me and my application. We had a 20-minute conversation that convinced me that this was the program for me.”

From the first day of orientation until graduation, Ramputh credits the Batten School’s tight-knit community of students, faculty, and staff with making his transition to UVA seamless.

“Because of the way the Batten School is set up—from orientation to the student-run organizations to the Monday Batten Hours, it’s a very inclusive, close-knit community and made me feel at home immediately,” said Ramputh. “I don’t think this would have necessarily been the case had I transferred to another university.”

For Ramputh, Batten was the rampart to becoming more socially ingrained in the greater University community while allowing him to enjoy the perks of a smaller more intimate classroom setting.

“Although I was at technically at a large university, I had the benefit—thanks to being a Batten student—of having smaller classes,” said Ramputh. “This allowed me to get to know my professors better and for them to get to know me and my interests and how they could support me better.”

Ramputh, who graduated with a bachelor’s degree in public policy and leadership last May, was an active member of the Batten community from day one.

“Eric has been a vital, indispensable member of the Batten community,” said Anne Carter Mulligan, Director of Undergraduate Admissions. “As a transfer student, he brought a distinctive perspective to the table that enriched the educational and co-curricular experiences of his cohort.”

Ramputh confesses that while he misses the Batten community, he is bolstered by his experience over the last two years.

“Batten is truly a unique place and I have yet to discover a program like it. I don’t think anything like it exists in the nation,” said Ramputh. “Batten manages to be this all-encompassing program that satisfies all of your extracurricular, academic, and social needs as a student. It’s both academically rigorous and engaging while also very professional. Being part of the only fifth undergraduate class to graduate was an amazing experience and I don’t think I would have had the same experience had I transferred elsewhere.” 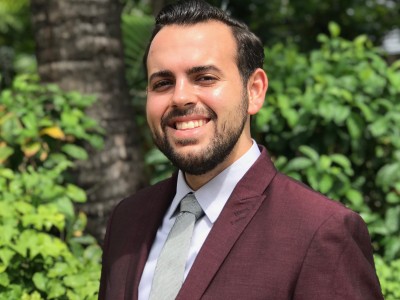 Miami native, Eric C. Ramputh (BA’19) graduated from the Batten School this past May. During his time at Batten, Ramputh worked directly with the Batten Undergraduate Admissions Office as its lead student liaison, and also volunteered with Madison House. With a life-long passion for foreign affairs and public service, Ramputh hopes to use his Batten education to serve the country in a political capacity. Currently, he is evaluating job offers in Washington D.C. and Miami, Florida. In a few years, he hopes to attend law school, possibly at UVA.