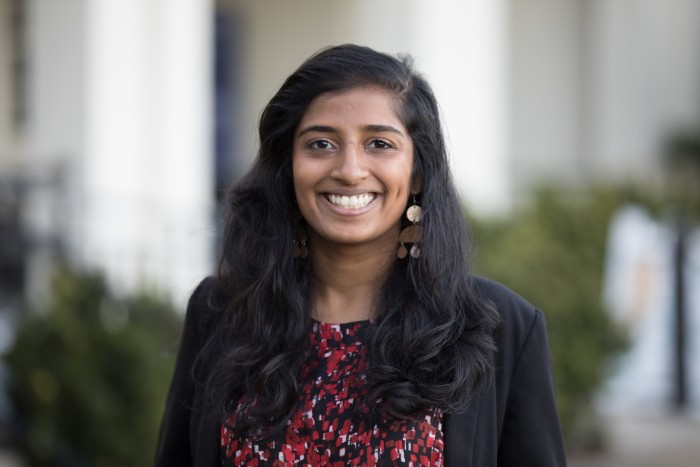 For Sumedha Deshmukh (MPP’17) good policymaking should be able to anticipate unintended consequences.

“Something Batten instilled in me early on was that policy needs to be practical and that you need to always think about who the users are and how a certain policy will affect them,” said Deshmukh, “This was something that came up in a lot of Batten courses, especially with Professor Gelsdorf and Professor Pennock and stuck with me after I graduated.”

Deshmukh who graduated in 2017, joined the World Economic Forum as a Project Specialist focusing on Blockchain and Distributed Technology in December 2018.

“I was always interested in technology—especially emerging technology and how it interacts with policy,” said Deshmukh. “I was particularly drawn to the World Economic Forum’s model of public-private cooperation, bringing together governments actors, civil society organizations, and businesses to co-create policy frameworks.”

Deshmukh who studied economics as an undergraduate at UVA credits the Batten school with helping her find her voice.

“Coming from an economics background, you’re not so focused on the messaging,” said Deshmukh. “Policy writing allows you to get your message out and actually connect with your intended audience to make an impact.”

Prior to joining the World Economic Forum, she worked for Devex, as an Associate Producer focusing on creating content for global development professionals. As a Project Specialist, she still wears different hats but says that the same skills and knowledge instilled by Batten play a pivotal and crucial role on a day-to-day basis.

“Currently, I am working on three different projects, all of which deal with different applications for blockchain,” said Deshmukh. “Basically, we are creating policy frameworks for each project, working with local stakeholders in an effort to make each project inclusive and transparent.”

“These are very ambitious projects,” said Deshmukh. “The unifying factor is that we—the World Economic Forum—bring more people—from government actors to civil society organizations to corporations into the fold. For example: how do we make blockchain deployment in supply chains more interoperable and inclusive?”

The other two projects share a similar undertone. The Central Banks project, for instance, brings together over 35 central banks from around the world to share knowledge and best practices with blockchain and distributed ledger technology research and pilots – with the ultimate aim of producing a framework for such pilots.

“We want to find out a way to share their learnings and the research they’re doing in blockchain,” said Deshmukh. “Our job is to also provide a safe environment where they can come to together, share their work, but do so anonymously. Until now, most banks are very risk-averse when it comes to sharing the results of their blockchain work.”

The third project on unlocking government transparency focuses on the balance between anonymity and transparency on the blockchain. For now, the project will focus on the procurement of school lunches in Colombia – which is an area that multiple stakeholders have identified as an opportunity for increased transparency. The project then aims to scale to other use cases and countries.

Sitting across on all three of those projects has proved eye-opening, thrilling, and also challenging for Deshmukh, who joined the Forum only four months ago.

“In my short time here, I have enjoyed working on these projects,” said Deshmukh, “Seeing firsthand how to bring together different focuses and making sure that people’s input is included in a final policy framework is no easy feat, but I am enjoying it, learning a lot, and feel like I can make an impact.”