A Conversation with Lisa Hall on Impact Investing and Economic Mobility 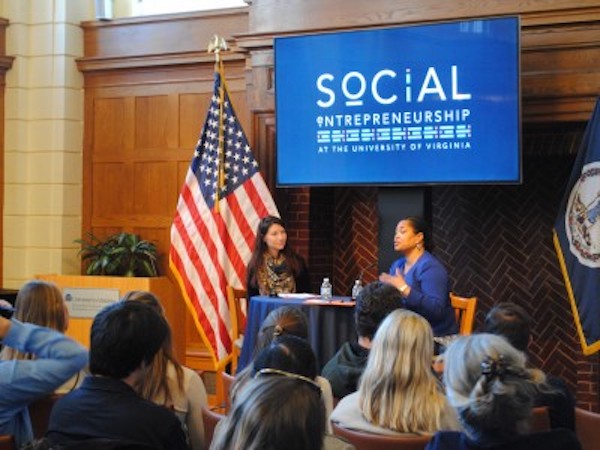 Lisa Hall is acutely aware of how capital can be used for the betterment of society. Former CEO of the Calvert Impact Capital, Hall has worked in a variety of sectors and developed a unique vantage on inciting social change and economic equality.

Hall, who spoke at Batten as part of the SE@UVA’s speaker series, is a Senior Fellow at The Beeck Center for Social Impact + Innovation, an experiential hub at Georgetown University that trains students and incubates scalable, leading-edge ideas for social change.

The discussion took place in the Great Hall and was led by Batten professor Christine Mahoney, director of Batten’s SE@UVA. Professor Mahoney kicked off the conversation asking Hall how she became involved in impact investing.

“Fair to say that I have always been intrigued in how to use business to solve social problems,” said Hall. “I attribute that to my upbringing—my mom was a school teacher and my dad was a social worker, so community activism was always important growing up.”

It was during Hall’s undergraduate studies at the University of Pennsylvania’s Wharton School when she realized capitalism possessed a range of tools that could be applied to solving social problems. This led her to work on issues of housing and community development while working with Chemical Bank in New York City and later at Fannie Mae. Since then her career has largely focused on community development finance.

Community development finance, in nature, is not so different from what many have come to know as impact investing—a term that was not coined until ten years ago. While it was not an official term per se, the act has existed in practice long before the term was made official—at least a decade according to Hall.

“The broadest definition has three parts: one is intentionality—that there is an actual intention to generate impact; second: commitment to measuring those outcomes; and third: that there is a return.”

The last part distinguishes impact investing from other philanthropy, which traditionally does not expect a return—something Hall believes has led to skepticism when it comes to impact investing.

Hall turned to the students and asked how many of their parents knew what impact investing actually meant—and only a few raised their hands.

“This is what needs to change,” she said. “People are not very educated about what impact investing actually means which means that it is up to you [students] to educate the future gatekeepers.”

Hall raises an important point. As academic entities such as SE@UVA continue to educate and promote awareness about social entrepreneurship and impact investing, it also remains imperative for graduating students to use that knowledge to educate the gatekeepers of the finance world.

Hall made a strong impression on students, including Batten undergraduate Molly Newell (BA ’19).

“As a student pursuing a future in social impact, the opportunity to learn from Lisa Hall was absolutely amazing”, said Newell. “Her experiences in nearly every corner of social innovation gave me a clear insight into how I could use the lessons I’ve learned in the classroom to accelerate progress.”