The Economic Factors that Divide America

Last week, the Batten School and the Center for Politics hosted an event in Garrett Hall titled “The Economic Factors that Divide America” as part of the National Symposium Series on Democracy. Moderated by Assistant Professor of Public Policy, Education, and Economics, Sally Hudson, the event presented three panelists: Matt Erskine, Executive Advisor at Booz-Allen Hamilton, who previously had worked for the Department of Commerce as the U.S. Deputy Assistant Secretary of Commerce for Economic Development as part of the U.S. Economic Development Administration (EDA); Darden Professor of Entrepreneurship, Greg Fairchild; and Ken Stern, former National Public Radio (NPR) CEO and a frequent contributor to The Atlantic and Vanity Fair. Mr. Stern has for the last five years focused on polarization in America, which led to a book, Republican Like Me: How I Left the Liberal Bubble and Learned to Love the Right, published in the fall of 2017.

With the midterm elections looming, moderator Sally Hudson noted, “It’s hard to believe, but it’s 2018. The mid-term elections are just a month away and the start of the Great Recession is now in our rear-view mirror. Almost exactly ten years ago today, in September 2008, Lehman Brothers filed what is still the largest bankruptcy in American history, spurring the biggest drop in the Dow Jones that we had seen since the attacks of September 11th. And depending on whom you ask, whether those ten years are a lot or a little, people will give you very different answers. Because some households in the United States have long since recovered, the top ten percent of American households have achieved the wealth that they had before the Great Recession, but the bottom 90 percent haven’t and indeed the bottom half of American households have less wealth today than they did in 1970. Sit with that for a second—the bottom half of American households have less wealth than they did 50 years ago.”

How does this translate to American politics today? American voters tend to express their economic frustration at the ballot box. How will that impact the outcome of the November 6th midterm election?  What if Americans were not as divided in their politics as they are now, what kind of policies would they pursue?

Turning to the panelists, Hudson paused and asked them to think idealistically about the policies they might pursue. After all, America is a nation built on ideals—one of those ideals being freedom and the second being equality.

A common thread that emerged among the panelists was the idea that there is local power to be leveraged and that it is often constrained by national policies.

Hudson pointed out that this is similar to the “chicken and the egg problem.” There’s no denying national politics is divided and fractured today, something that became apparent in the last election. Much of this is due to the loss of jobs and livelihoods in local communities and the sense people have of being left behind. The question is how can federal policies support goals that lead to economic opportunity and prosperity at both the local and national level. How can voters be persuaded that Washington has solutions and is not ignoring their problems? Try and imagine

For Matt Erskine, “localities are the laboratories of democracy and innovation,”—a very Jeffersonian ideal. Relaying his own experience working for the U.S. Commerce Department in Washington, he noted that many of the initiatives aimed at stimulating growth at the local and state level often felt like Moses coming down the mountain with the ten commandments, telling people what they needed to do, and then leaving them to fend for themselves. Although many of these government-funded projects have the best of intentions, they often fail to ask the locals themselves what they think is best for their community.

For Fairchild, whose work has focused on the different views of Main Street and Wall Street, and the misconceptions the two have about each other, “there is a sense of loss for Main Street, while the people on Wall Street feel like the people on the Main Street don’t understand them. They think they (Wall Street) deserve the lifestyles they have not only because they are the smartest and the best in the country, and know what they’re doing, but because they are creating value and economy of opportunity.”

This belief was underscored when Goldman Sachs CEO Lloyd Blankfein said, “We are doing God’s work.” Well, he said that because investment bankers are the only ones capable of creating that kind of economic value—a value that people outside of the finance world can’t possibly understand. From the ordinary citizens’ perspective, Goldman Sachs and the other Wall Street banks were the villains who wiped out the savings and jobs of millions of Americans, many of whom never recovered.

Dividing America further is the general distrust of Washington generated by not only local economic problems but a sense that Washington is ineffective and out of touch. If there is distrust in the government, then the question arises, then where are people finding trust?

Hudson then asked whether bipartisanship still exists—or can exist in today’s political climate.

For Stern, who spent a year traveling to economically distressed communities around the country —all prior to Trump’s 2016 election—the notion of bipartisan politics has lost its currency, and there’s both an economic and a social root to it. The big elephant in the room is if Washington is in fact dead? And if so, does this mean that the solution now rests within each state?

From what he witnessed in his travels and work as a journalist, Stern believes that states have the capacity and the will to act.

“Looking at the next half-century,” Stern concluded, “if there is going to be innovation and change, then it is going to be on a local level, which means we will have to rethink the role of government and how we allocate resources and achieve growth.”

Agreeing with Stern, Erskine referenced the book Our Towns, which makes the case that if one can get past the national rhetoric, get past the partisan politics, then one can discover there are communities that are finding success through reinvention. Written by Jim Fallows, who together with his wife, traveled throughout small-town America, the book recounts their encounters and experiences with towns that had overcome debilitating setbacks to find success elsewhere—without big government telling them how to do it.

Erskine said, “We don’t do a good enough job of telling these stories or creating these informal networks for communities facing huge macroeconomic shifts. “

He went on further to say, “There are a number of government programs that tend be a little preachy—we know best, and we’re going to tell you how to do it. From my experience that does not work.”

With the midterm elections less than a month away, the factors that divide Americans economically and also socially will be present at the polls, but it is up to citizens to look for these untold stories of success as a factor that unites Americans—and one that may continue to do so in the future. 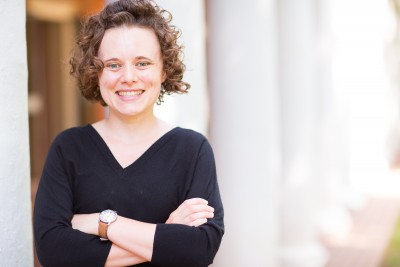 Sally Hudson is an assistant professor of public policy at the Frank Batten School of Leadership and Public Policy. Hudson is a labor economist who studies recruiting and retention in the public sector. Her recent work analyzes teacher retention in hard-to-staff school districts and the effects of salary schedules on mid-career recruiting.

On Wednesday morning, Nov. 14th, students, faculty, staff, and members of the community gathered in The Dome Room of The Rotunda for a panel discussion titled “Mobilizing for the ERA: Lessons from the Past and Present.” The event was part of a 10-day statewide tour aimed at educating Virginians on the absence of gender equality in the U.S. Constitution and highlighting bipartisan statewide support for ratifying the Equal Rights Amendment (ERA).