Batten professor Molly Lipscomb has a creative solution to a public sanitation crisis—and a new vision for the center that’s helping to address it.

When you want to encourage the citizens of your country to purchase a certain product—green energy, say, or water-saving toilets—the policy solution might seem straightforward. Just offer subsidies to bring the price of that product down.

But especially in developing countries, that doesn’t always work, said Molly Lipscomb. And when the product you want people to buy is as fundamental as proper sanitation, this can present a serious problem.

A Batten associate professor of public policy and economics and the new director of the recently rebranded Center for Social Innovation (previously Social Entrepreneurship at UVA), Lipscomb has researched environmental and public health in Brazil, Senegal, Burkina Faso and other countries. She’s used to thinking creatively about these kinds of issues.

“Developing countries have a really hard time providing access to major infrastructure like electricity, water and sanitation in their fast-growing cities,” she said, “so a lot of my work asks, ‘If the government can’t afford network-level expansions [to that infrastructure], what are the ways you can improve access on the margin?’”

This is the case in Senegal, where Lipscomb has been conducting research since 2010. If you live in the capital city of Dakar, your household probably has a concrete-lined latrine pit. And when your pit gets full, you have two options: Hire a man with a truck to vacuum your sewage up and take it to a treatment plant, or hire a man with a shovel and bucket—which is technically illegal—to come in the middle of the night, dredge your sewage up and bury it in the middle of the street.

Perhaps unsurprisingly, the second option is cheaper, and it’s the one many people choose. It’s also one reason why raw sewage can flood the streets during the rainy season. How do you encourage people to hire a truck instead?

Lipscomb’s solution, which she developed through a collaboration with the nonprofit Innovations for Poverty Action, has been covered by a range of major news outlets. Subsidies weren’t going to work in this situation, because the latrine-emptying market was controlled by what Planet Money’s Robert Smith has called “the poop cartel”: a group of truckers who had banded together and agreed to charge the same unreasonably high rate.

If the government offered subsidies, the truckers would just raise their prices. “​​There would be no impact,” Lipscomb said, “except on the government budget.”

Lipscomb needed to find another way to bring the cost down. So she came up with a clever innovation: her team partnered with the sanitation company DELVIC to create a call center with a text message auction. When people who need their latrines emptied call in, call center employees text the truck drivers with a request for bids. The trucker who makes the lowest bid is offered the job.

Lipscomb designed the system to introduce a dose of healthy competition to the market by essentially turning the truck drivers against each other. It worked. “We were able to reduce prices in some neighborhoods by quite a lot—up to 27%,” she said.

As of this summer, Lipscomb is bringing her knack for generating inventive economic solutions to her role as the new director of Batten’s Center for Social Innovation, or SI@UVA, which identifies difficult social problems, designs creative ways to fix them and shares those fixes with policymakers and other stakeholders. In this capacity, Lipscomb replaces Batten professor Christine Mahoney, who successfully led the center for more than a decade.

Although the center’s commitment to creative problem-solving remains the same, Lipscomb is spearheading a shift in its focus and scope. SI@UVA will develop social solutions that span a broader range of disciplines—including economics, political science, social psychology, civil engineering and data science—and encourage more cross-disciplinary collaboration among faculty.

“A lot of social problems are extremely complicated, and we cannot answer them using just one lens,” Lipscomb said.

The name change for the center is also significant. “There's a real focus in social entrepreneurship on just the private sector, whereas we’re trying to make clear that we also aim to work on innovative programs with governments and NGOs,” she added.

Some of that work is already happening. DELVIC is a private company, but SI@UVA is also partnering with the city of Kampala in Uganda to replicate Lipscomb’s call center model, with the goal of reaching poorer populations. SI@UVA is also collaborating with the city of Charlottesville to increase financial mobility for African American residents and with the Nature Conservancy to conserve and restore 253,000 acres of forest land in Central Appalachia.

Regardless of public-private distinctions, Lipscomb believes the center’s focus on building strong partnerships with organizations outside of higher education is both unique and useful. “We’re asking questions that we don't expect to always lead to publication—we just expect them to be important to the organizations themselves,” she said. “This is how we deepen the relationships and pave the way for collaboration on larger grants. It’s something that very few centers take the time to do.”

This approach also collapses the boundaries between academia and the “real world” in a productive way, she added.

“While a lot of research may be excellent, it can often take a long time before it's adopted,” she said. “Whereas in this case, we're looking at solutions we know these organizations will put into use right away.”

With its tight focus on research that serves each organization’s needs, as opposed to more easily generalizable research, this model might seem limiting. But as Lipscomb has seen, focusing on real-world partnerships can keep researchers in tune with the issues that need their attention most. In Uganda, for example, SI@UVA is not only replicating the call center she created in Senegal, but investigating how the same system might be used to address the COVID-19 crisis.

“We’re not just coming up with questions that are interesting to me or interesting to, say, a political scientist,” Lipscomb said. “This approach allows us to think more deeply about pressing problems in the field.” 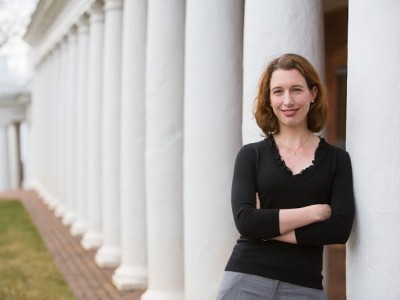 Molly Lipscomb is an associate professor of public policy and economics at the Batten School and the Director of the Center for Social Innovation at the University of Virginia.  Lipscomb’s research focuses primarily on environmental issues in developing countries and adaptation to lack of centralized health and sanitation services.

Decentralization and Pollution Spillovers: Evidence from the Re-Drawing of County Borders in Brazil