At Batten, student organizations new and old are deepening the School’s connection to Charlottesville—and to the wider policy world. 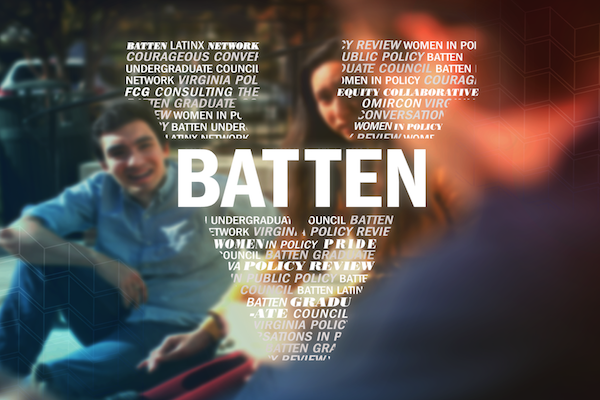 When Catalina Perez-Parra (MPP ’21) became president of Women in Policy last year, the student organization was all but defunct. “They didn’t really have any meetings, and they didn’t have a huge presence on Grounds,” she says.

But Perez-Parra saw the lack of activity as an opportunity. “It was nice to have creative autonomy,” she says. “I didn’t have to follow any of the rules that were in place before.” Within four months, she had registered Women in Policy as a Contracted Independent Organization at the University of Virginia and grown its membership from 33 people to more than 300.

She’s not alone in taking this kind of bold initiative. Batten students are leading at the forefront of the University, chairing the Honor Committee and the University Judiciary Committee, representing UVA students to the Board of Visitors, and making their mark on the field as student athletes.

Closer to home, Batten students are leading the charge with their engagement in virtual service and community-building. Despite the fact that they can’t meet in person, the executive boards of Batten’s graduate and undergraduate councils have been more active than ever, not only using their platforms to provide virtual social gatherings for classmates, but also serving as valuable advocates and sounding boards for students and administrators alike. Jill Rockwell, dean of student and career services, says she has been particularly impressed with the work of Batten council leaders Matt Gilliam (BA ’21) and Thomas Roberts (MPP ’21).

“Whether they were collaborating to host the largest Batten Builds to-date or successfully lobbying the highest levels of the UVA administration for a ‘Credit/No Credit’ grading policy, I have been daily inspired by their leadership and their tireless executive board members,” she says.

In an incredibly tumultuous time for the University, the nation, and the world, Batten students are unafraid to take the lead, acting in service of the public good. And for students like Perez-Parra, who refers to our moment as a “window of opportunity,” that looks like re-envisioning existing student organizations—and creating new ones.

Many of Batten’s recently formed student groups focus on social justice in their missions, aiming to empower historically marginalized people. But the leaders of these organizations are also building equity into their very design.

Women in Policy “is primarily driven by democracy,” says Perez-Parra, who sends out a monthly poll asking members which topics they’d like guest speakers to cover. “I really think it's important for the voices of the women in the organization to be heard.” Speakers hosted by the group have ranged from Batten professors to an advisor for the Obama administration, and they’ve discussed everything from the gender pay gap to mental health.

Similarly, Batten students who formed the Equity Collaborative this summer decided to give their group a fairly non-hierarchical structure. The collaborative’s goals include auditing diversity in Batten’s curriculum, increasing equity in the hiring and admissions process, and offering academic support to Charlottesville students. Teka Lenahan (MPP ’21), one of three MPP students who founded the collaborative, says that rather than enforcing a strict hierarchy, the founders “crowdsource” volunteers by asking members to join whatever projects pique their interest under those three goals.

“We looked around and saw that a lot of grassroots organizations were adopting a less structured approach,” Lenahan says. “It helps to be flexible, especially when you're working inside power structures that might not always be conducive to what you're looking to do. You need to give people freedom.”

Newer groups like Women in Policy and the Equity Collaborative are not only committing to equity, but also to deepening Batten’s relationships both with Charlottesville and the greater policy world.

Student organizations with a longer history at the School share that vision—and they’re finding fresh ways to realize it. Perhaps Batten’s oldest student organization, the Virginia Policy Review has been contributing meaningful insights to academic policy debates for more than a decade. Although probably best known for its print journal, VPR also produces a podcast that caters specifically to the interests of MPP students. Geoff Paul (MPP ’21), the new editor-in-chief, says that he intends to further broaden the review’s audience this year by resurrecting the organization’s blog, which he says will publish short op-ed pieces in the style of The New York Times and The Atlantic.

“I’m going to run the organization a little bit more like a newsroom,” Paul says. “I’d like [our writers] to say to themselves, ‘I have all these tools that I learned at UVA. How can I communicate with the people around me?’”

As Paul and his peers know, connecting with those people can be challenging. When Lenahan asked a local middle school how the Equity Collaborative might help address issues their students faced, “there was a bit of apprehension at first,” he says. “There’s a long-standing notion in the [Charlottesville] community that student-led organizations are fickle. But once we got over that hurdle, they started opening up and telling us what they needed. And that includes things that you might hardly even think about, like food and clothing delivery.” In addition to meeting those immediate needs, Lenahan said the collaborative plans to support professional programming that will benefit students far into the future, such as a Zoom career fair.

The way he approached that middle school matters, Lenahan notes: “We've noticed that, too often, student organizations go into a community and say, ‘This is what we think that you need.’ And generally, that doesn't work.”

Libby Scully (MPP ’21), who recently founded Batten’s LGBTQ student group, PRIDE, says that she’s learned a lot about community-building during her tenure as the client outreach chair of FCG Consulting, a group run by Batten students that helps local organizations better achieve their missions. She vividly recalls a talk that Jasmine Rangel (MPP ‘21), the community outreach chair of Batten Graduate Council, offered to FCG. “She explained that you need to keep the focus on the [local] organizations themselves,” Scully says. “They’ve been in their particular policy arena for many years. They're the experts.”

Adopting that posture starts with education. Perez-Parra says that Women in Policy is committed to bringing in speakers from the Charlottesville community to help other students better understand local issues, as well as the role they themselves play. In addition to being an MPP student, Perez-Parra works at the Legal Aid Justice Center, where she’s learned how UVA students living in apartments off Grounds contribute to housing instability.

“We have an undeniable impact on Charlottesville,” she says. “I always try and make sure that we let [our members] know what's going on. If we're going to live in this community, we have to at least be conscious about where we are—and then think about what we can improve the environment for everyone.”

With their focus on equity and strengthening community relationships, Batten student groups are also transforming policy conversations, making them more accessible, collaborative, and inclusive. That’s certainly the case with PRIDE—which stands for Policy + Rights Drive Equity—Scully says. She founded the organization after she noticed that LGBTQ issues often went undiscussed at Batten. Since then, PRIDE has hosted a range of speakers, from national security experts to ACLU lawyers.

“It’s important to recognize that LGBTQ policy intersects with every single sector of policy out there,” Scully says. “I think that that's the main role of PRIDE: to help people realize the importance of recognizing the LGBTQ community when making policy decisions.”

That kind of intersectionality has been at the forefront of Perez-Parra’s mind as well. Over time, she says, she’s come to see how the organization can productively discuss a broader range of subjects, looking not just at issues that are largely limited to women’s experiences, but also at women’s perspectives on topics such as climate change and mental health.

Regardless of each organization’s focus, open conversation is key. Beyond VPR’s efforts to reach a more diverse audience, Paul says, the review is looking to hold virtual discussions between students at peer schools about issues such as gerrymandering—which looks different in places like Chicago or Boston but remains relevant for policymaking across the country.

Whether they’re supporting local organizations or shaping federal policy, Batten students see their service to communities large and small as a dynamic relationship—a two-way street. “I think serving as a bridge is really important,” Paul says, of VPR’s work. “In our best form, we can approach the community with humility, but still new ideas.”

The Batten School is home to a wide array of student organizations that work tirelessly to strengthen our community and create transformational change.

Represents the needs and interests of the graduate student body–enriching their overall experience via community outreach, special events, and professional development activities.

Cultivates a community-based space for Latinx students to share resources and support one another throughout their time at Batten.

Represents the needs of the undergraduate student body, providing organized opportunities for students to connect as they adjust to life at Batten.

Fortifies the impact of Charlottesville’s most socially conscious organizations.

Partners with faculty and staff to create opportunities to promote and discuss policy affecting the LGBTQ+ community.

Promotes policy analysis and divergent thinking through its various publications, including its annual journal.

Brings together men and women to discuss policy topics that directly relate to women or that women have a vested interest in, fostering a community of understanding and trust.