On Mondays, retired U.S. Navy Rear Adm. Paul Becker drives from his home in Alexandria to the University of Virginia. He holds office hours to meet with students, grabs an early dinner on the Corner, then teaches a course, Middle Eastern Policy Challenges and Opportunities, at the Frank Batten School of Leadership and Public Policy.

The next morning, Becker holds additional office hours before heading back to Alexandria. “It’s a beautiful 24-hour getaway,” he said.

Becker, who served 30 years as a Naval Intelligence officer in peace, crisis and combat, is a recognized expert in national security affairs. His postings include serving as director for intelligence of the Joint Chiefs of Staff in the Pentagon, the U.S. Pacific Command in Hawaii, the International Security Assistance Force Joint Command in Afghanistan, command of the U.S. Central Command’s Joint Intelligence Center and assistant naval attaché to France.

Becker said he has been approached by several universities about teaching closer to his home, but is only interested in doing so at UVA.

“I like UVA’s physical separation from the Beltway of Washington, D.C.,” said Becker, who has taught at UVA since 2017. “I think there’s a groupthink and an influence from being so close to the Capitol building that impacts the perspectives of both faculty and students.

“I like the fresh look here because of some distance between Charlottesville and D.C. itself.”

Becker also likes the fact that certain facets of UVA and the Batten School remind him of the U.S. Naval Academy and Harvard University, his alma maters.

“I see a nice combination of the two,” said Becker, noting the Honor Code, an emphasis on building leaders and the spirit of public service he sees on Grounds and in Batten’s newly formed National Security Policy Center.

Becker said he wasn’t pursuing a career in teaching after leaving the Navy, but a chance encounter with Batten Dean Allan Stam provided a unique opportunity. “My work-life experience is the strategic value proposition that I bring, as opposed to a Ph.D. degree,” he said. Over the past three semesters, Becker also taught courses on the U.S. Intelligence Community and Indo-Pacific Policy Challenges and Opportunities.

With his expertise in national security, UVA Today asked Becker what he believes the five biggest worldwide threats to the United States are right now. His responses:

“China is aggressively attempting to reshape global norms in their favor. That presents risk to international standards that have been part of 70 years’ worth of peace and stability – in Asia in particular, but also in worldwide functional sectors.”

“They’re looking to destabilize U.S. and Western alliances – and they have incredible military and cyber capacity to inflict harm.”

“They’re a state sponsor of terrorism and have an oppressive theocracy against what their population would like to see in terms of more liberal human values – women’s rights, democratic ideals, etc.”

“The cyber domain lends itself for small, empowered groups – as well as nation-states – to inflict significant infrastructure damage or intrusions on long safe-guarded institutions. For example, North Koreans hacked into Sony Pictures several years ago. That doesn’t cause great concern for average Americans, but when China hacked into the Office of Program Management’s database that has files with very sensitive personal identification information on hundreds of thousands of Americans with security clearances – financial records, health records, etc – there’s a great potential for that information in the wrong hands to cause difficulties down the road.”

“It can still cause death and destruction when one least expects it for nothing more – just focusing on religious terrorism – than the radical ideas of those who would do us harm.”

Which threats are the greatest?

“It’s tough to rank them one through five,” Becker said, “but if you put these five dots in a circle, any one of them could be the most prominent at any one time.’” 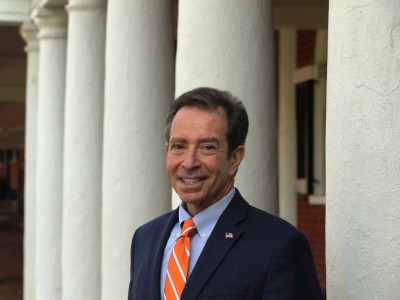 Paul Becker is a former Naval Intelligence Rear Admiral who served for 30 years around the globe in peace, crisis and combat.