Remember Charlottesville with hope, action and a devotion to humanity

Five years ago this week, hundreds of people from more than 38 states and four countries stormed Charlottesville in a demonstration of rage and violence. Many bore insignia honoring Nazism and the Confederacy. They performed Nazi salutes and chanted hateful slogans. They scapegoated immigrants, Blacks and Jews. Some said they wanted to start a race war. Their actions injured scores of people and resulted in the murder of a young woman.

“Charlottesville” became shorthand for hateful extremism in America. Despite its connection to the Declaration of Independence and U.S. Constitution, “Charlottesville” came to symbolize a revival of fear about the horrors of Jim Crow and the Holocaust. President Joe Biden would cite “Charlottesville” as the turning point in his decision to run for president.

I was not yet living in Charlottesville in 2017, but — being a descendant of survivors of American slavery and European pogroms — I felt solidarity with the fear and anger. The invasion exposed a seething hostility that threatens democracies around the world. Beyond the risks of rival political tribes treating each other as existential threats, we have also seen a pummeling of democratic culture and institutions. American laws and norms have been shattered, undermining the electoral infrastructure of our republic. The Jan. 6 insurrection exacerbated the danger and sense of alarm. It would be negligent to disregard the possibility of fascism in America or to fail to protect our democracy from this ascendant anti-democratic movement.

I moved to Charlottesville to be part of the solution. As dean of the University of Virginia’s Frank Batten School of Leadership and Public Policy, my colleagues and I prepare students for leadership to serve our divided world. My daily commute retraces the path marched by the torch-carrying white nationalists five years ago. On moonlit evenings, I imagine the terror of students who were menaced by the “river of flames” on campus. I also think about our graduates who were hiding for safety beneath their desks in the U.S. Capitol while it was under attack. I tell my students that there is nothing inevitable about our democracy, nor its demise. Our imperfect, monumental experiment in self-government has always been a work in progress. The prospect of future progress depends on us, on the choices we make, and the courage of our pro-democracy response.

The urgency of response cannot be overstated, yet a feeling of overwhelm impedes us. Here is a place to start.

First, choose hope over despair. We lament our species’ perennial cruelty, inhumanity and myopic greed, and yet our heartbreak is overshadowed by wonder at feats of collective genius and creativity. As dire as things appear, we have endured worse, and we are still here.

Don’t surrender to the paralyzing seduction of fear. Instead, invest in hope as the hypothesis of human progress. One benefit of critically studying unvarnished history — sadly under attack at present — is the value of perspective. Narcissistic politics can be overcome. Mortal enemies can reconcile. Institutions can be repaired. Public policy can successfully address global challenges. People can heal and evolve.

Second, choose action over outrage. Instead of succumbing to media bait designed to provoke reaction, usually disgust or fury, we can take constructive steps. Do research and stay informed with verified facts. Register to vote and vote. Help others register to vote. Support a candidate with a donation or volunteering. Write to elected officials. Join or plan a demonstration. Call out bad behavior to maintain standards of integrity and accountability. Work for an elected official. Become an appointed or elected official. Remember that state and local offices are disproportionately influential for gerrymandering, voting rules, education and other matters critical to our political future.

Third, focus on people rather than their politics. We almost always share more in common with people than we realize, yet our politics tend to divide and dehumanize us. Each of us can exercise leadership wherever we are to create the norms and behaviors we want at home, at work, in our classrooms and neighborhoods, online, and for this country. Let’s not forget our humanity nor the inevitably multidimensional humanity of others. Talk to people. Listen with humility. Beware of biases. Share our truths. Beyond politics, we can build compassionate communities that empower all people to thrive.

Finally, don’t wait for someone else to lead. The world is judging this American experiment, and the consequences of failure would be grave. There will be times when despair, outrage and politics overwhelm confidence in a democratic future. You can add a chapter in the pro-democracy playbook being written. Together we can lead with determined hope, dedicated action and devotion to our common humanity.

Read This in The Virginian-Pilot 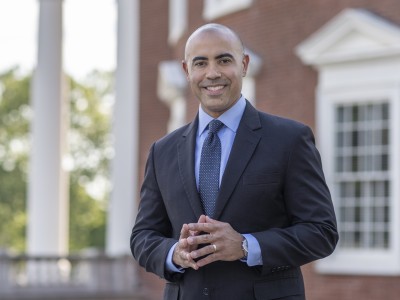 In this lecture, Dean of the Frank Batten School of Leadership and Public Policy and professor, Ian Solomon, shared from his experience and work how to lead in difficult times.

Batten School Dean Ian Solomon shared with a crowd gathered for UVA's Lifetime Learning series the unique approaches utilized at the Batten School when preparing students for a future of public policy and leadership.