Immigration issues have been a prominent fixture in the national media landscape for decades, but as this week’s Hispanic Heritage Month Batten Hour panel demonstrated, immigration isn't the only policy issue affecting the nation’s Hispanic and Latinx communities. Health care, the economy and the environment were all topics of discussion between Virginia Delegate Elizabeth Guzmán, Maryland Delegate Joseline Peña-Melnyk and moderator Kenneth Romero, executive director of the National Hispanic Caucus of State Legislators.

“As a public policy school, we must be aware and conscious of how certain policies will affect our communities,” said Brian Zuluaga (BA ’20), founder and president of Batten Latinx Network, the event co-host. “Comunidad Hispana, contrary to popular belief, is not a single-issue community.”

For students like Zuluaga, public policy schools have an added responsibility to engage students to deepen their knowledge about how policies impact minority and marginalized communities.

“Race, ethnicity, gender and social class are all forms of identity that should be woven into conversations we have at the Batten School,” said Zuluaga. “If we do not know how people will be impacted by a policy decision, it’s flawed even before implementation." 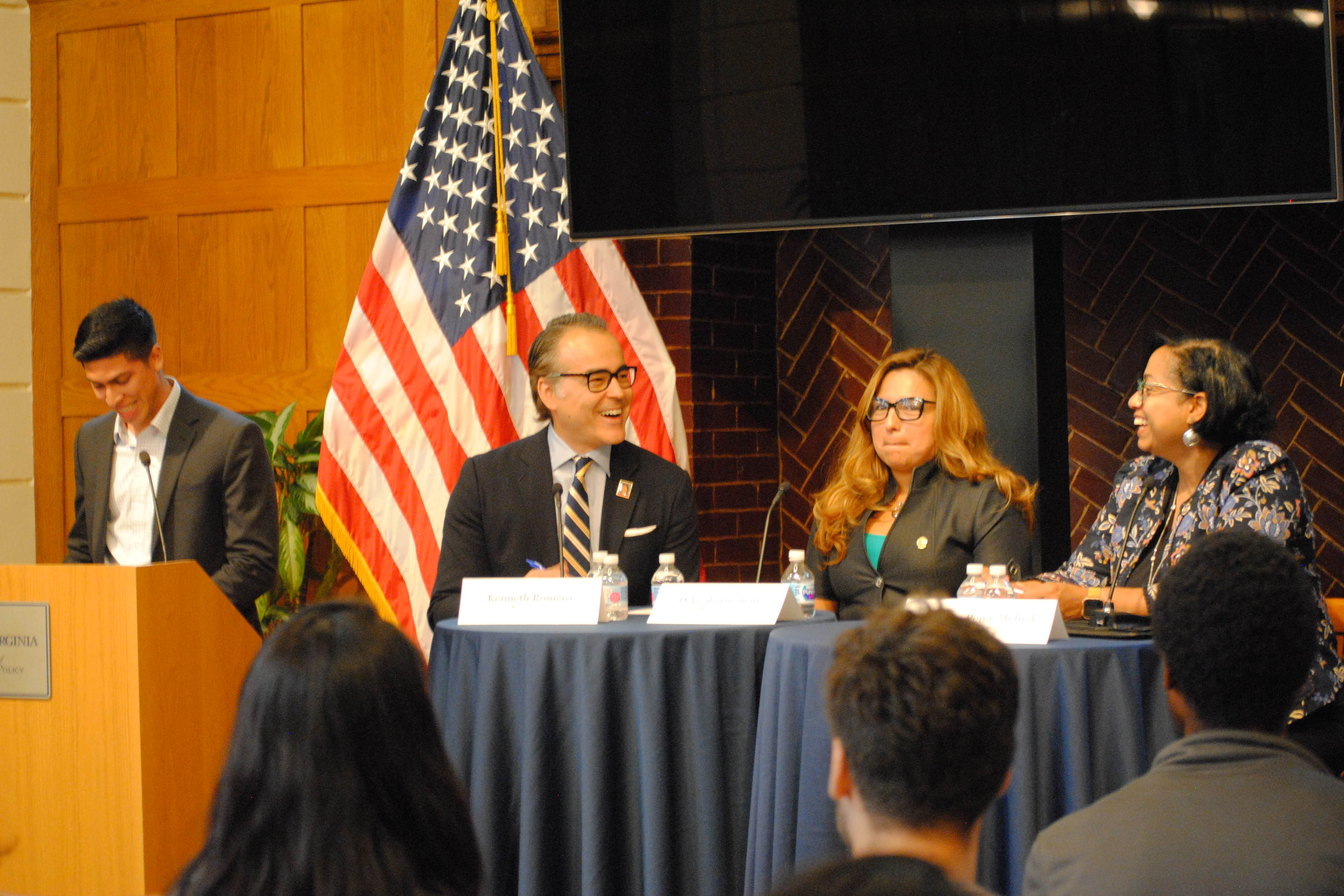 For Delegates Guzmán and Peña-Melnyk, race and identity continue to play a prominent role in their lives and their current work as state elected officials.

Recounting her immigrant story, Peña-Melnyk, who came to the U.S. from the Dominican Republic when she was eight-years-old, recalled how she quickly realized her community, especially how people of color, needed a voice that could transcend beyond language barriers.

Peña-Melnyk's mother, who could not speak English, relied on her to navigate new and complex government systems in the U.S. It was during their visits to the welfare office in Washington Heights, New York, that Peña-Melnyk became a translator for her mother and other non-English speakers who were unable to communicate their needs. She soon became an advocate for members of her community.

“My mother started calling me her little lawyer,” said Peña-Melnyk.

And while children are often impressionable, Peña-Melnyk said she isn't surprised that she later became a public defender and is now a state delegate. 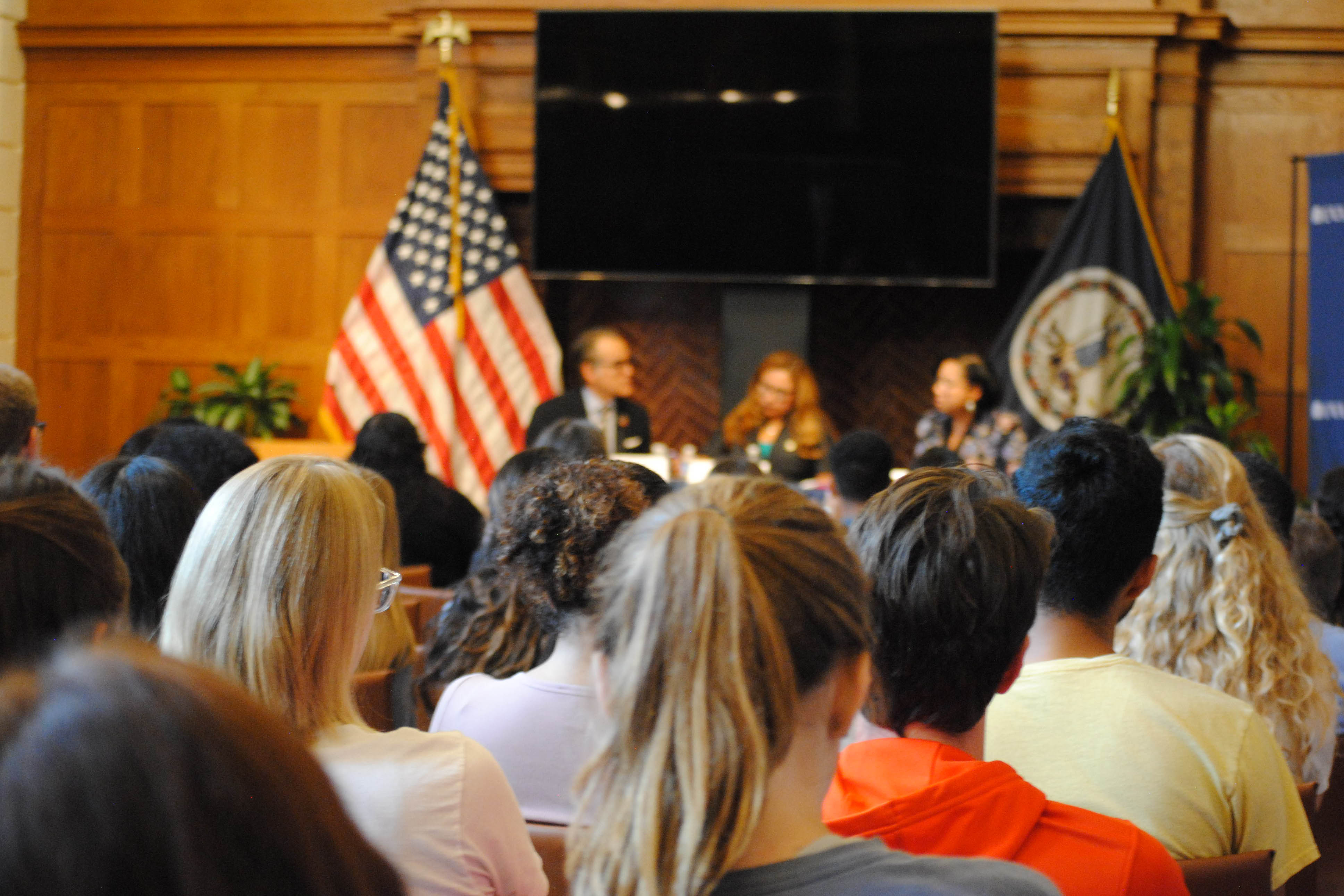 Both Peña-Melnyk and Guzmán recognize that their immigration stories carry similar undertones to today’s immigrant narratives and view their shared experiences as illustrative of the many barriers their communities frequently encounter.
Guzmán, who became the first female Hispanic immigrant to join the 400-year-old Virginia General Assembly when elected in 2017, emphasized how issues related to the environment are, at their core, social justice issues.

“Environment is a big issue for my base,” said Guzman, “The environment is connected to so many things, whether it’s health or jobs. Look at the case of the Pipeline—it’s not only about the environment, but also the health and economy of the communities in that area.”

For Peña-Melnyk, expanding Medicaid and broadening the benefits of the Affordable Care Act to cover low-income individuals became a reality under her leadership.

“Before Obama Care, Maryland had over 750,000 people uninsured,” said Peña-Melnyk, “This is for a population of almost 6 million people.”

Since 2013, the insured rate of Maryland citizens has increased by 53%, and children who were previously uninsured now have access to proper care and better benefits.

Peña-Melnyk recognizes that health care continues to be the leading cause behind debt and foreclosure, and issue that affect all Americans regardless of their background.

“It’s up to local governments and their leaders like myself and Del. Guzmán, and organizations like the National Hispanic Caucus of State Legislators, to work together to find solutions.”