2019 Recipients of the Outstanding Virginian Award 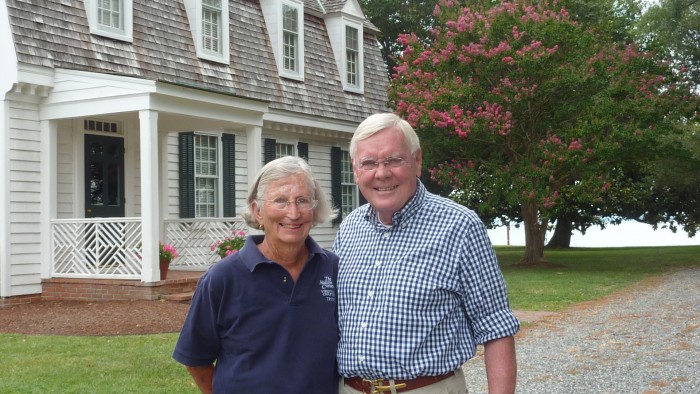 Tayloe is a Founding Trustee and former President of The Menokin Foundation, created in 1994 to save the historic home of Francis Lightfoot Lee, a signer of the Declaration of Independence, and his wife, Rebecca Tayloe, of nearby Mount Airy. Tayloe was a member of the Virginia House of Delegates from 1982-2000 and served as Secretary of Natural Resources from 2002-2006 under Governor Mark Warner. He was a member of the Chesapeake Bay Commission for 22 years and served as Chairman three times. He sponsored the Chesapeake Bay Preservation Act that was enacted by the General Assembly in 1988, and he also successfully sponsored the Water Quality Improvement Act in 1997.  These acts are designed to improve water quality in the Chesapeake Bay and other waters of the State by requiring the use of effective land management, land use planning, and state funding assistance. Tayloe also served on the Board of Trustees of the Chesapeake Bay Foundation and is regarded as one of the Commonwealth’s foremost authorities on Virginia’s natural and historic resources.

Helen also served as President of The Menokin Foundation and is a dedicated community activist and volunteer. She is a Founding Member and former President of The Garden Club of the Northern Neck, and she also served as President of The Garden Club of Virginia from 1992 to 1994. Helen was recognized by the Central Virginia Chapter of the Association of Fundraising Professionals as the Volunteer of the Year in 1999 for her nonprofit work in the Commonwealth. She has served on innumerable boards over the years, including the boards of the Virginia Nature Conservancy, the Virginia Historical Society, the Virginia Outdoors Foundation, the State Board of Historic Resources,  the Lewis Ginter Botanical Garden, and the Alliance for the Chesapeake Bay. She was a Founding Trustee of the Rappahannock Community College which awarded her an Honorary Degree in 2018.

The Garden Club of Virginia awarded Tayloe and Helen the Massie Medal in 2002, considered the most prestigious award given by the Club, for their contributions to environmental conservation and protection. In 2015, they were the first recipients of the Conservation Champions Award from the Northern Neck Land Conservancy.  The Murphys have dedicated their lives to educating others about the benefits of conservation. Tayloe and Helen leave a legacy as devoted environmentalists through active stewardship of their own land and their vast conservation efforts throughout the Commonwealth.