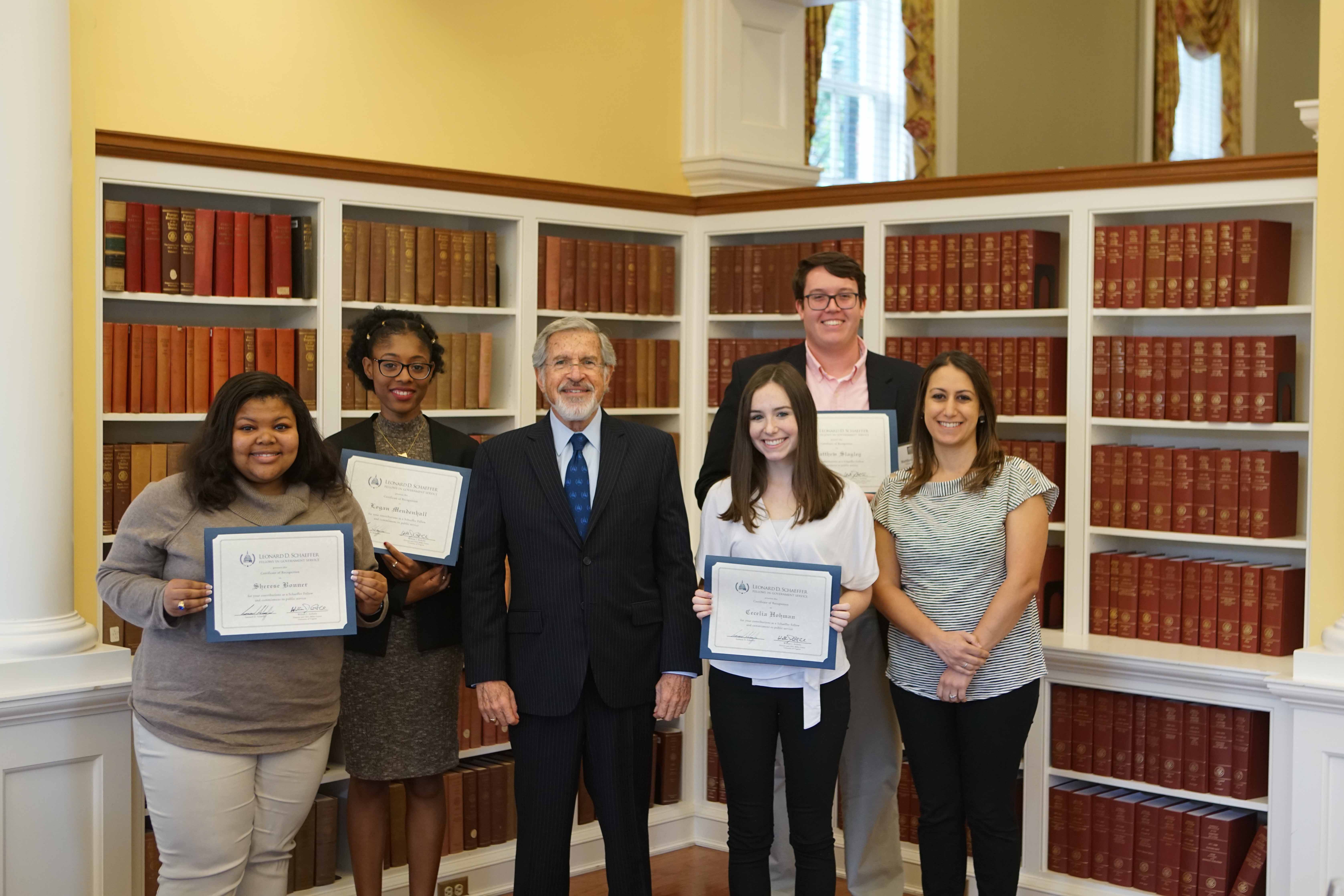 For students drawn to public service, hands-on, high-level government internships can provide a different view of the public policy milieu. By directly exposing students to the day-to-day functions of government work, the Leonard D. Schaeffer Fellows in Government Service program offers a unique opportunity for students interested in pursuing careers in policymaking and understanding how they can individually make an impact.

Given the program’s emphasis on public service and government work, it should come as no surprise that out this year’s five UVA Schaeffer fellows, three were Batten students.

As Schaeffer fellows, Bonner, Hohman, and Marciano each had a chance to participate in a 10-week government internship of their choice, where they were exposed to the complexities and intricacies of government operations.

For Bonner, the fellowship allowed her to develop a better understanding of how local and state government operate and why local government, in particular, possesses a strong capacity to incite real change. Working in the Richmond Mayor's office, Bonner conducted research on policy issues related to carbon fees, solar energy, and urban forests.

"Throughout the course of my internship, I was able to witness the formation of a task force whose purpose was to address and reduce the infant and maternal mortality rates," said Bonner. "As research has shown, women—African-American women in particular—are disproportionately mistreated within the healthcare system. As a result, they are facing health crises that put their children and themselves at extreme risk."

The chance to witness the formation of a task force aimed at alleviating maternal and infant mortality health concerns revealed to Bonner the critical role local government can play in effectuating real change. The 10-week experience has since translated to her current coursework, particularly in Batten Professor Kristen Roorbach's Trauma and the U.S. Public School System course, while further clarifying her goals to pursue a Master of Public Policy or Master of Public Administration degree upon completing her undergraduate studies.

“One of the most rewarding experiences during the fellowship was when I was able to meet Governor Northam and to talk with him about the many pressing issues facing the state of Virginia,” said Bonner. “I was also able to interact with the Governor's Fellows, the majority of whom were from the University of Virginia. Like me, they were performing policy work in various offices. Each of these experiences contributed to my internship experience and reinforced how the work I was performing at the local level connected to the state level.”

For Hohman, the Schaeffer Fellows program proved equally rewarding, allowing her to pursue her life-long interest in public service while at the same time allowing her to deepen her knowledge of how health care policy operates at the federal level.

"Having the chance to witness first-hand what government service entails as well as the opportunity to see how it operates on a day-to-day basis was a great way to preemptively begin my studies at the Batten School," said Hohman. "It reinforced my desire to pursue a role in government and public service and allowed me to focus on issues related to health care. By speaking to professionals and visiting think tanks, such as the Brookings Institute, I quickly realized that there are so many different avenues within the policy world that I can pursue after I complete my studies.”

Hohman interned for the Centers for Medicare and Medicaid in the Department of Health and Human Services, where she collaborated with the Payment Policy and Financial Group to devise policy solutions aimed at making healthcare more affordable.

"I saw the Schaeffer Fellows program as a unique opportunity for professional development," said Hohman, "During my internship, I learned first-hand how policies are written, how they're evaluated, and later enacted into law. It was truly an eye-opening experience.”

Witnessing the full life cycle of how policy is created has since influenced Hohman's own approach to writing policy memos, a common assignment for all Batten students.

“In any of my current courses, I try to connect how a certain area of policy we’re studying directly or indirectly affects our health care system, and whether said policy might impact health care positively or adversely,” said Hohman.

Monica Marciano’s interest in foreign affairs drew her to an internship at the U.S. Department of State Bureau of Conflict and Stabilization Operations. Thanks to the Schaeffer Fellows program, she was able to accept the unpaid internship. Having studied Spanish and foreign affairs with a focus on Latin America prior to applying to Batten’s accelerated MPP program last spring, Marciano was able to leverage her previous studies and current policy interests to help the Bureau’s Western Hemisphere team mitigate conflict in Venezuela, El Salvador, Honduras, Guatemala, and Colombia. She divided her time in D.C. by also serving as an intern for Virginia Senator Tim Kaine's office.

“I worked a lot on the crisis in Venezuela and the peace efforts in Colombia, as well as did research on Nicaragua and Haiti,” said Marciano, “This work not only enhanced my knowledge of Latin America but proved to me how I can carry that knowledge into real-world policy context to address critical issues.”

Besides the funding aspect of the fellowship, Marciano was drawn to other elements of the program which included pairing fellows with mentors and hosting a D.C.-based summit where fellows had the opportunity to meet each other and exchange their experiences and discuss their own career aspiration

“The summit was a great way to feel like I was part of a community,” said Marciano, “By giving me the chance to meet students from other universities who shared the same desire to work in public service, I was able to learn about the different kinds of policy interests concerning my generation. I even reconnected with a good friend from high school who was also a Schaeffer fellow."

On Wednesday, Oct. 16, program founder Leonard Schaeffer visited Grounds, where he spoke with the four of the five University Schaeffer fellows, including Bonner and Hohman over lunch at the Miller Center. Marciano was unable to attend because of a class conflict. Five years since its inception, the program has supported over 130 Schaeffer Fellows in more than fifty different government offices and agencies

“We are thrilled that three of our talented students had the opportunity to represent Batten and UVA as Schaeffer fellows,” said Jill Rockwell, Batten’s senior assistant dean for student and career services. “The program provides participants with invaluable exposure to the policy world, while at the same time introducing them to a network of public servants who will continue to impact their careers long after the conclusion of their fellowships. I know that with their passion for service, these exceptional Batten students will make a similar impact on future Schaeffer cohorts—and ultimately, the greater global community.”

The Pilot and Legacy Awards, named in honor of the Batten School’s late founder, Frank Batten, Sr., are the most prestigious student-nominated awards for graduating Master of Public Policy students and students graduating with a Bachelor of Arts in Public Policy and Leadership.