The Pilot and Legacy Awards, named in honor of the Batten School’s late founder, Frank Batten, Sr., are the most prestigious student-nominated awards for graduating Master of Public Policy students and students graduating with a Bachelor of Arts in Public Policy and Leadership. According to Batten School Senior Assistant Dean Jill Rockwell, there were a record number of nominations for these awards across both cohorts this year—something she said was not surprising, given the lasting impact the Class of 2020 has had on students, faculty, and staff alike.

The “Pilot Awards” recognize graduating MPP students who have, in their own way, led the Batten School through their excellence and outstanding contributions to the School and greater community. Mr. Batten, former Chairman and CEO of Landmark Communications, desired that his company be distinguished by two things: extraordinary dedication to public service and outstanding performance. He said these goals were “inseparable - bound up together - and the sooner we can accept this concept, the quicker we can see that our transcendent purpose must be the pursuit of excellence.” In the spirit of his words, five MPP students were selected for this meaningful honor.

From Bultman’s Nomination: “Ashley has demonstrated excellence and leadership in a variety of ways. First, Ashley is an excellent classmate. She elevates the level and depth of conversations in every classroom that she walks into. Not only is she incredibly insightful, but she is also curious and passionate about all aspects of policy. Her energy and willingness to learn is infectious and her work as a scholar demonstrates her dedication to policy work. I can speak from personal experience that I have learned a great deal from sharing a class with Ashley and am incredibly grateful for her positive and kind presence in the Batten School.”

From Checknoff’s Nomination: “Ruth embodies the idea of excellence in leadership and policy analysis. As an ECON teaching assistant (TA), she has been amazing and always there for her students. She cares about us and demonstrates leadership every week in discussion sections. She makes herself available to help us in every way possible. If you didn't understand something, she worked with you until you did. Throughout the year, she made ECON enjoyable! Ruth’s love for learning and helping others is evident in every interaction with the students she teaches. We couldn’t have asked for a better Econ TA.”

From Golding’s Nomination: “LeAnn is everything a Batten student should strive to be. She is supportive, hardworking, and dedicated to not only her own goals, but helping others to achieve theirs. Throughout our two years at Batten, LeAnn has always been involved. She reaches out to classmates who seem that they may be struggling, always picks up the slack when others will not, and lights up every room she walks into with her warm personality and smile. She’s always involved, prepared, and incredibly willing to share her knowledge or learn from others. LeAnn’s selflessness is inspiring and I am so excited to see where her future takes her on her next journey with the Red Cross.”

From Stolz’s Nomination: “I can think of no graduating Batten student who better exemplifies the virtues outlined by Mr. Batten. Ben has served as a leader in our MPP cohort from the very beginning. His dedication to public service and outstanding performance are clear to anyone who has interacted with him. In the classroom, Ben embodies excellence in both leadership and policy analysis by encouraging professionalism and positivity, asking thoughtful questions, and supporting other students’ learning. With his bright smile alone, Ben has changed the trajectory of so many of my days at Batten. Whether I was facing an academic or personal challenge, Ben always made time to actively listen to me and help me find a better solution. I know that he has done this for so many students, and I speak for all of us when I say ‘thank you, Ben.’”

From Tsang’s Nomination: “Through her undergraduate career and throughout her time at Batten, Seneca has served as a volunteer firefighter and EMT, often logging over 60 hours a week answering emergency calls and helping the citizens in Charlottesville and Albemarle County. Even amidst the COVID-19 pandemic, she has continued to volunteer her time and energy. Meanwhile, she has also excelled in her studies at Batten. Through all that she does, Seneca remains optimistic and energetic and has been a friendly face among the Batten Class of 2020. She is the type of person who brightens the room with her smile, who notices when her peers are struggling, and who will drop everything to help a person in need.”

The undergraduate “Legacy Awards” are annually presented to five graduating students who have, in their own way, demonstrated leadership at the Batten School in five separate categories, each reflecting the virtues and experiences that distinguished Mr. Batten throughout his inspirational life.

"The earlier in their careers that exceptional students begin to think of themselves as future public leaders who can promote a better society, the greater the likelihood they will become such leaders."

Mr. Batten embodied the idea that the success of an organization or community is dependent on its leadership and its commitment to public service. It is through this leadership that organizations evolve and address the needs of its members. Fortunately for us, the Batten School is full of these leaders. The recipient of this award is a person who has made significant contributions to the Batten Community. He or she has gone above and beyond the call of duty in helping to make Batten the best that it can be. Whether it be through a quiet, dignified or more outward and robust style of leadership, this person has left a great legacy of leadership at the Batten School.

From Zuluaga’s Nomination: “Brian has had a huge impact on Batten, spearheading the Batten Latinx Network and monitoring its development with a great deal of determination, compassion, and leadership. He does not seek public recognition for this accomplishment, and tends to downplay his own role in it. This is a testament to his humility and the depth of purpose he feels in pursuing these goals. He is a mentor to many in Batten and especially to those entering BLN. He continues to build networks with students and faculty alike, pursuing his vision with the intention of helping lift others up.”

Zuluaga is also the 2020 recipient of the Z Society’s Edgar F. Shannon Award.

When, after the US Supreme Court's Brown v. Board of Education decision, Mr. Batten chose to publicly support school integration through his newspaper, the Virginian-Pilot, he met with angry opposition and internal resistance. Mr. Batten stood fast to his beliefs and made tough decisions, despite going against the tide of popular opinion. Through his bravery and resolute ideals, he helped inspire the community of Norfolk to peaceably integrate without the violence that occurred elsewhere across the country.

The recipient of this award is an individual who is steadfast and confident in his or her beliefs, and is not afraid to go against the grain to do or say what they think is right. This person challenges conventional practices when appropriate, asks tough questions, and has a strong moral compass. Respected by his or her teachers and peers alike, this person will leave behind a legacy of courage and integrity.

From Schaefer’s Nomination: “Matt consistently shows a willingness to go against the grain and take an unpopular stance in class. He also asks interesting questions, and has challenged me to think about class topics from new perspectives. Multiple community members spoke of Schaefer’s “goodness” and kindness, saying that on a daily basis, he set an example for the way that people should live their lives.

Despite great adversity, Mr. Batten was able to obtain great success. In 1977, he was diagnosed with throat cancer, had his larynx removed, and had to relearn to speak. It was after overcoming this disease that he created the Weather Channel--yet another aspect of his life through which he faced great challenges. The concept of a 24-hour weather station was considered novel, at best, and while the Weather Channel almost went under, Mr. Batten's persistence and vision led it to great heights. In the face of the adversity, he overcame great obstacles, and he credited his success to his steadfast perseverance.

The recipient of this award embodies Mr. Batten's perseverance. This student, despite significant obstacles throughout the course of his or her life, has proven able to persevere and overcome challenges and has emerged as a leader poised to do great things in the world.

From Alexander’s Nomination: “Ryan has always been unafraid to share his opinion within our cohort. I admire his courage to speak up for under-served communities and to approach problems with an equity lens. He is true to himself and his values. His perspective often challenged classmates' but his experiences and comments were necessary to the better education of others. He never gave up, even when he may have felt like his efforts were futile, and we are all the better for it.”

"Never has there been a greater need for the University's most important product: enlightened and ethical leaders who leave the Grounds prepared for public life- in their communities, in their professions, in the world at large."

This is a person who embodies the now-famous quote that graces navy blue Batten School coffee cups throughout Garrett Hall and beyond. Trailblazer. Innovator. Pioneer. Whatever we call this student, it is with characteristic initiative and passion he or she now stands poised to enter the world and immediately make an impact, wherever he or she sees the greatest need.

From Faloni’s Nomination: “I have worked with Lauren primarily within the Batten Latinx Network (BLN), but she does so much more for under-served communities at UVA. She is the executive director of the Latinx Leadership Institute and she’s also a University Guide. I am constantly impressed by her ability to join an organization and quickly leave a positive impact. She is an enlightened and ethical leader.”

Mr. Batten was given the unique opportunity by his uncle to become publisher of the Virginian-Pilot and its afternoon sister paper at the age of 27. His drive for delivering relevant news to the people of Virginia was underscored by his intellectual curiosity and thirst for knowledge.

The recipient of this award is a person who, in addition to his or her academic achievement, truly enjoys learning. He or she has an intellectual hunger and passion for policy and consistently shares this with and encourages it in others. Whether it be in class discussion, group work, or outside conversation, this student pushes his or her classmates to think outside the box and adds value to the education of his or her peers.

From McCabe’s Nomination: “Keelyn might be the most emotionally and socially competent student with whom I’ve ever worked.  She took my team leadership class (LPPL 3450) and then the Resilient Student class (LPPL 2100). I was so impressed with her engagement, curiosity, and kindness (toward other students and me) that I asked her to be one of two students to pilot a program that included undergraduate students on the LPPL 2100 teaching team. Not surprisingly, Keelyn was a fabulous addition to a teaching team that included vice presidents, deans, and seasoned counselors. In fact, she made that team better.” 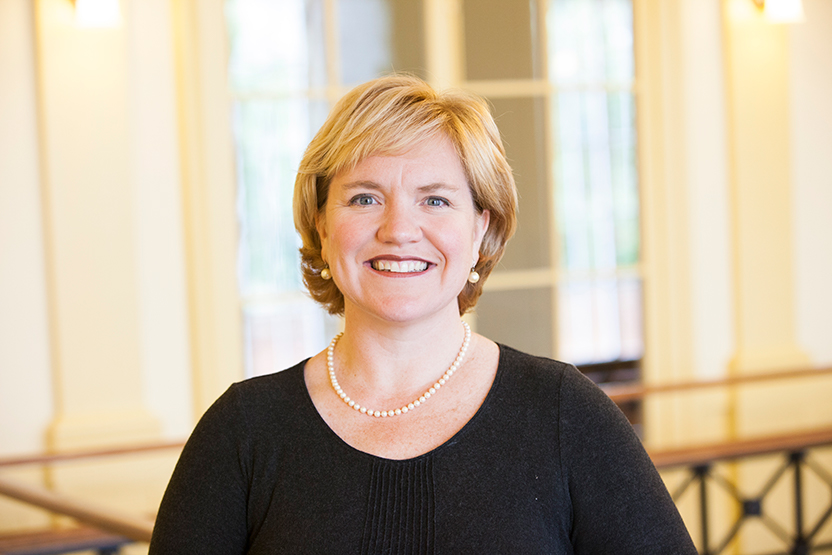