How Women Leaders Can Enhance Rulemaking In The Biden Administration

Although the dust on the 2020 election has barely had time to settle, it’s already become clear that rulemaking will be central to the success of the 46th president’s policy agenda. With a likely divided government or at least very slim congressional margins, much lawmaking will be mired in gridlock, making rulemaking an attractive pathway for accomplishing policy change. Moreover, President-elect Biden has pledged to reverse a number of Trump administration regulations, a commitment that likely includes environmental rollbacks, campus sexual assault policies, and immigration among other issues.

As President Trump discovered in attempting to undo Obama-era rules, however, such changes cannot be achieved overnight. Reversing course and advancing the president-elect’s own policy priorities will require federal agencies to successfully manage the notice-and-comment rulemaking process. Yet, there are no guarantees when it comes to rulemaking; getting a rule across the finish line involves navigating byzantine procedures and avoiding political quagmires. Rules frequently languish at the proposal stage or get overtaken by politics.

How can the Biden-Harris team increase its odds for regulatory success? And will the Biden administration’s commitment and initial steps toward achieving gender parity in bureaucratic leadership roles help or hinder these efforts?

Our research suggests that strategically matching leaders and agencies can amplify an administration’s success in the rulemaking arena. Specifically, we examined the role of women as leaders in the rulemaking process. Using an original dataset of more than 8,000 agency rules generated by federal agencies between 1995 and 2014, we looked at the gender of the leader responsible for issuing each rule. Our analysis focused on two metrics of agency leader success: the scope of the rulemaking projects undertaken, which we refer to as ambition, and the ability of a leader to finalize the rulemaking projects he or she initiated, which we refer to as execution.

Our findings offer three insights for the new administration on how to think about appointments strategically with respect to leader gender and rulemaking success.

1. WOMEN EXCEL IN THE RIGHT SETTINGS

Although the media focus is on Biden’s picks for top agency posts, the leaders responsible for managing the regulatory process are often lower on the organizational chart. These bureau heads are critical to the policy process and carry a host of titles, such as “Director” of the National Park Service, “Assistant Secretary” for Occupational Safety and Health, “Commissioner” of the Food and Drug Administration, and “Administrator” of the National Highway Traffic Safety Administration. Across three presidential administrations and 142 agencies, we studied the rulemaking activity of 481 agency leaders, 26 percent of whom were women.

During any given year in our time series, there were approximately 68 agency heads overseeing the issuance of new rules.

For these leaders, our study showed that there was no “across-the-board” performance premium for women as compared to men. That is, men and women were both equally likely to introduce ambitious rulemaking proposals and see them through to finalization during the course of their tenure.

However, once we took into account the features of the agencies in which leaders worked, an interesting gender difference emerged. While no two agencies are alike, we homed in on one aspect of agencies that we thought might make a difference for women leaders: how supportive the agency is toward women employees. In both the public and private sectors, research has shown that workplaces where women are more supported are associated with better performance outcomes for women leaders, possibly owing to different communication styles or the promotion of a more collaborative culture.

With respect to agency work environments, a variety of factors might characterize their support for women as employees and leaders. We assigned every agency in our dataset a score based on three aspects of its work environment: 1) the gender breakdown of the bureau’s overall leadership team; 2) the gender breakdown of the bureau’s rank-and-file workforce; and 3) the average pay grade differential between women and men in the bureau. Specifically, our measure of agency supportiveness is calculated annually for each bureau and is scaled from zero to one; higher values indicate a more supportive agency. For example, the Federal Aviation Administration (FAA) received the lowest score in 2004, while the National Science Foundation (NSF) received the highest rating in 2008.

Such variance in agency support for women had no effect on rulemaking ambition or execution across agencies led by men. However, our findings show that these work environment characteristics mattered significantly for women leaders. Specifically, women are particularly successful in leading rulemaking efforts in agencies that are supportive of women, but perform quite poorly in unsupportive environments.

The figure below illustrates these results graphically. The left panel shows the predicted effect of having a woman (compared to a man) lead an agency on the ambition of a rule (with higher values of ambition associated with a more ambitious rule); among agencies that score low on supportiveness, women leaders underperform their male counterparts, but as the supportiveness of an agency increases, women leaders become more likely to propose more ambitious rules. This difference from an unsupportive environment to a supportive one amounts to about a standard-deviation increase on our ambition scale. The right panel shows similar effects for execution. Across the full spectrum of agency supportiveness—moving from the FAA to the NSF—there is a major swing of nearly 53 percentage points in the probability that a woman leader finalizes a proposed rule. 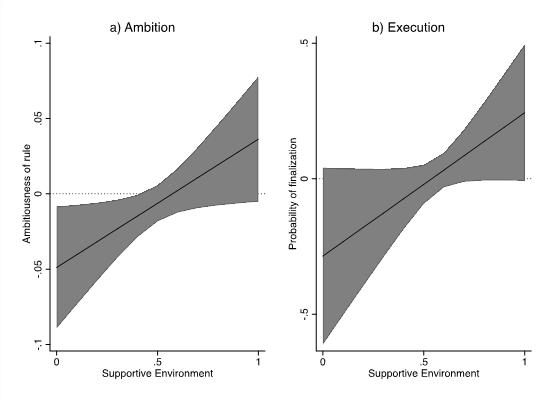 Our study highlights an interesting gender differential, but one that must be interpreted cautiously. While women succeed in supportive working environments that include lots of other women and where women have status within the organization, the results demonstrate the converse as well. Compared to men leaders, women underperform in agencies that are not supportive of women.

However, it would be naïve to conclude that women “should” always be selected to lead one type of agency and men “should” always lead another. Instead, the appointment of more women leaders heightens the importance of focusing on supportive work environments as a key factor for whether they will succeed or fail in their rulemaking efforts (and perhaps in their leadership aspirations overall).

Prior research has demonstrated that across presidential administrations—and across countries—women tend to be disproportionately appointed to bureaucratic leadership posts in policy areas that are loosely defined as “women’s issues,” such as education, health care, and social services. Given this tendency, our study also examined the success of women leaders when they were elevated into leadership roles in these traditional areas.

The results were decidedly mixed. In some analyses, we found that women working on so-called “women’s issues” outperformed their peers (i.e., women working in agencies not focused on women’s issues, as well as outperforming men) in terms of the ambition and execution of rules. However, in other analyses the results showed no meaningful difference. What accounted for these different findings was how we defined what counted as a “women’s issue”–the definition of this term is open to scholarly debate and, accordingly, there is no definitive classification.[1]

Given the sensitivity of our results to this definition, we are hesitant to draw broad conclusions about any rulemaking performance differential for appointing women to these positions. We are especially cautious to avoid promoting the “glass walls” that lead to limiting the appointment of women only to certain agencies. Our findings suggest that women can succeed anywhere—especially in supportive environments.