Even though women make up roughly half of the students enrolled in law school today, they do not take up roughly half of the speaking time in law school classes. “Speak Up” and similar studies. While these studies carry different names (including “Speak Up” and “Speak Now”), we call them Speak Up studies throughout this paper. that have been conducted at several law schools (including Harvard, Yale, Stanford, the University of Chicago, and the University of Pennsylvania) have demonstrated that women are less likely to speak in the law school classroom than are men. Why do women speak less than men? Is that effect fixed, or does it change if circumstances change? And if so, what, if anything, should be changed in the classroom?

To answer these questions, we undertook three studies to examine when and why women at an elite law school, the University of Virginia, speak in class. We found that both social and academic contexts affect women’s participation. In Study 1, we transcribed and coded recordings from 107 class sessions of required first-year law school courses taught during a single academic year. Replicating previous Speak Up studies, we found that female students speak less than male students. That gap closes, however, when professors call on students systematically and when class size is smaller. In Study 2, we surveyed four different graduating classes at four different points during their law school experiences—at orientation, after their first semester, before their second year, and shortly before graduation. We found that women report speaking less than men, but that gap appears during the first year and disappears by the end of the third year. Interestingly, we found that women and men at orientation report similar expectations about how much they will speak in class and that women near graduation report speaking at the same levels that men report speaking. In other words, gender gaps in speaking are not fixed, but dynamic. And, as we will explain, they are a function of context, such as social concerns and dislike of particular pedagogies. Finally, in Study 3, we surveyed students from the Class of 2021 specifically about the social costs of speaking in class. We found that women, more than men, report backlash for speaking in class, and this difference affects their willingness to participate in the law school classroom. 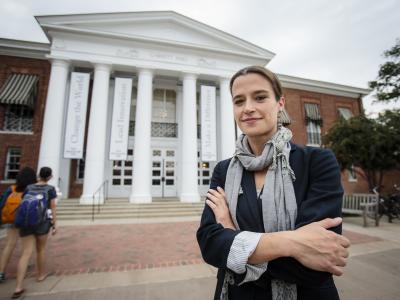 Sophie Trawalter, Batten Family Bicentennial Teacher-Scholar Leadership Associate Professor of Public Policy at the Frank Batten School of Leadership and Public Policy and associate professor of psychology at the University of Virginia, studies phenomena related to social diversity, specifically how people navigate intergroup contact and intergroup contexts, with a particular focus on how people develop competencies and learn to thrive in diverse spaces.

Narratives about Africa as dark, depraved, and diseased justified the exploitation of African land and people. Today, these narratives may still have a hold on people’s fears about disease. This group of scholars conducts tests and studies that, when taken together, make clear that reactions to pandemics are biased, and in a way consistent with historical narratives about race and Africa.

The Frank Batten School of Leadership and Public Policy at the University of Virginia announces the appointment of Eileen Chou and Sophie Trawalter as inaugural Batten Family Bicentennial Teacher-Scholar Leadership Professors.